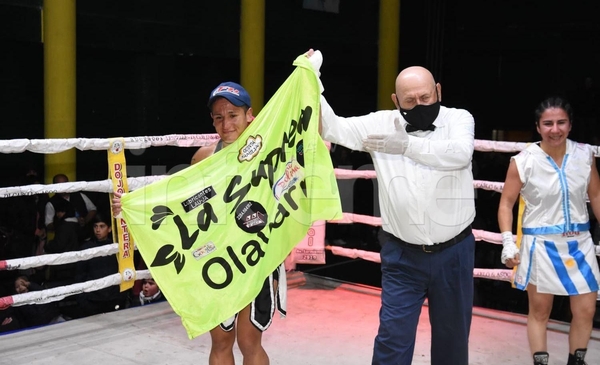 Six amateur fights and two professional ones gave excitement to the cold Friday night at the Festival that took place at the Mariano Moreno Development Society and that had around 400 spectators.

Despite the change in the organizer (it was “Tito Videla”, with Carlos Gasparini) and being regulated by the Olavarría Boxing Commission, the June event again had problems with the schedules, so less than half of the public present could see the return to victory of the local Lorena Agoutborde in a new presentation in condition in Olavarría.

The Agoutborde “Machine” faced Lilian Silva in one of the bottom matches and won by majority decision. After the 6 rounds, Pedro Goyeneche saw a draw and scored 57 equals, Macos Castañeda favored the representative of Barragán Box by 58 to 54 and Juan Gutiérrez also in favor of the local but 57 to 56.

Previously, at the other professional crossroads, Geronimo “El Caballero” Vazquez -who weighed 65,900 kilos at the time of the weigh-in- defeated Denis Andrade on cards which on the scale registered a weight of 65,650.

The fighters faced each other for 8 rounds of 3 minutes and after the fight, Juan Gutiérrez scored 78 to 74 in favor of Vázquez and Juan Santucchi and Pedro Goyeneche scored 79 to 73 in favor of the boxer from La Pampa.

In addition, there were 6 preliminary crosses with some Olavarrienses in the ring and the only one who could emerge victorious was Sasha Bertolano from Barragán Box who defeated Ana Laura Pignanelli.

Rosa Bermúdez from Barragán Box and Gisel García did not take advantage and they were defeats for the local gentlemen, Nicolás Gallardo from Uvi Box could not beat Benjamín Rigo from Azul and Facundo Farías from Team “Tito” Videla lost to Luis Bethonart.

Loading...
Newer Post
The NBA looks for tight finishes in the Finals
Older Post
NBA Finals 2022: Stephen Curry is an alien and takes over the final