The Boxing Showcase and Boxing Week, with the unconditional support of the WBC 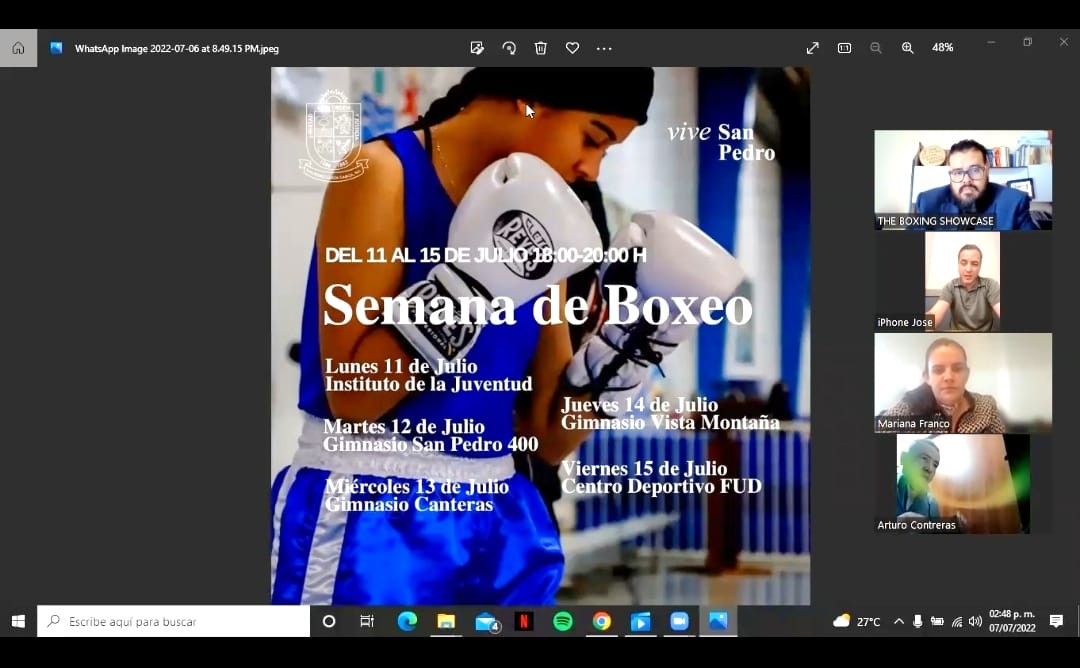 Mexico.- With the presence of the president of the World Boxing Council, Mauricio Sulaimán, the CEO of the promoter The Boxing Showcase, José Migu

Mexico.- With the presence of the president of the World Boxing Council, Mauricio Sulaimán, the CEO of the promoter The Boxing Showcase, José Miguel López, offered details of Boxing Week, an event that opens the activities for “La Silla Fight Night”, billboard that at the same time launches the tournament “The Big Belt Championship” on Saturday, July 16 in the municipality of San Pedro Garza García, Nuevo León.

In a videoconference and in the presence of the director of the Municipal Institute of Physical Culture and Sports, Sergio Salinas Carballo, and Mariana Franco, of Marketing and Digital at the Showcenter Complex, José Miguel López explained that Boxing Week aims to support the women who suffer from domestic violence and children who suffer from bullying.

The promoter indicated that Boxing Week was presented for the first time in Texas and commented that “it has been excellent for us, the participation was very good; Many civil associations in the United States that help women are already participants in these events as well, they are already our partners.

“They have loved how women learn self-defense, how children are empowered and can get ahead through boxing of these problems that occur in their daily lives.”

He specified that it is motivating to present Boxing Week for the first time in Mexico and thanked the permanent support of the president of the WBC, Mauricio Sulaimán. And in the case of San Pedro Garza, he expressed his gratitude to the Institute of Physical Culture and Sports, the OCV, the Showcenter Complex and the teachers who will teach boxing classes in the different venues.

Boxing Week will be presented from 6:00 p.m. to 8:00 p.m. in the following scenarios: Monday 11 will start at the Youth Institute; on Tuesday the 12th it will continue at San Pedro 400; on Wednesday the 13th it will be the turn of the Mirador Canteras Gym, and on Thursday the 14th they will be at the Vista Montaña Gym.

And on the last day, Friday the 15th, the FUD Sports Center will receive the general public who wish to receive self-defense and boxing classes.

The participants in the Boxing Week activities will be invited to the “La Silla Fight Night” function.

The intention of Boxing Week is, said José Miguel López, “to create great champions”, although by rescuing them from the streets “they are already more than world champions”, he asserted.

The person in charge of Physical Culture and Sports of San Pedro, Sergio Salinas, pointed out that from the beginning the project convinced the municipal authorities.

The CEO of The Boxing Showcase expressed his confidence that he will be able to reach more entities with Boxing Week and the box functions as their closing. In that sense, he made an analogy with the backpack where he carries his clothes.

“It is a backpack full of dreams. For me it would be more comfortable to stay in my business and forget all the problems that occur, but really we all have to bring that backpack of dreams, to get to other places to put a grain of sand. Yes, you can, you occupy nothing more than the will”.

At the beginning of the video conference, the world’s top boxing official, Sulaimán Saldívar, dedicated words of appreciation to The Boxing Showcase and its CEO, José Miguel López, whom he described as a person of determination, work and honor.

“He has had a difficult time for humanity, which was the pandemic, but he is a leader, he is a winner and he will always have the support of the World Council and all its members to support his initiatives. “The World Boxing Council joins in unconditional support and we will be there to see how successful you are, José Miguel”.

Tags: Books, Focus News, highlights of the week
Successful first day in Mexico of Boxing Week
CDMX will host the 59th Convention of the World Boxing Council
The NBA has already defined the game for its return to Mexico
BOXING 3544

Loading...
Newer Post
Quite a question mark: the chances of Mick Schumacher continuing in Formula 1
Older Post
The 5 best fighters in the history of the UFC