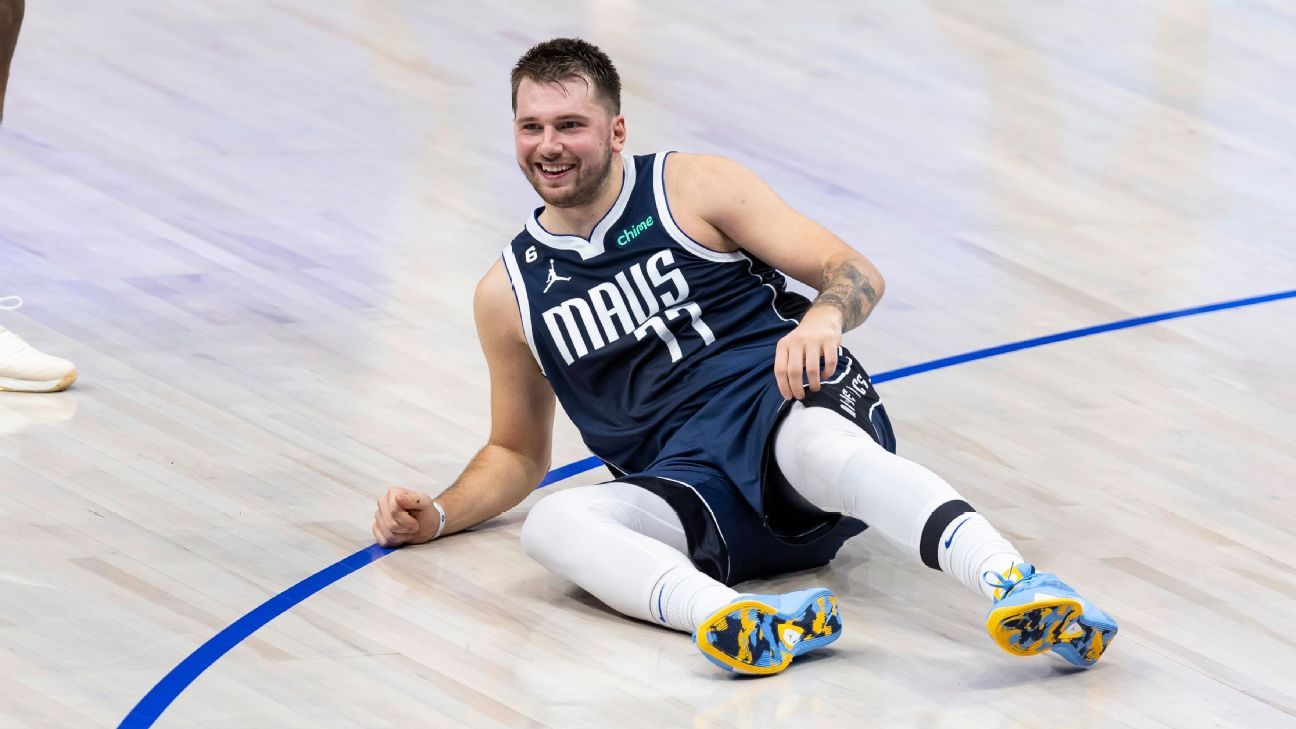 LOS ANGELES -- With their eighth straight win and still undefeated, The Milwaukee Bucks extended their magnificent start this Friday while Luka Don

LOS ANGELES — With their eighth straight win and still undefeated, The Milwaukee Bucks extended their magnificent start this Friday while Luka Doncic continues to make NBA history and the Portland Trail Blazers stormed Phoenix on a buzzer-beater score by Jerami Grant.

Milwaukee improved its record to 8-0, after beating the Timberwolves, with a great performance by Giannis Antetokounmpo, who left with a triple-double, after scoring 26 points, capturing 13 rebounds and dishing out 11 assists.

The Milwaukee Bucks broke the record for the best franchise start this Friday (8-0) with a clear victory over a subdued Minnesota Timberwolves from start to finish and that lost 22 points in the third quarter.

Giannis Antetokounmpo posted a triple-double (26 points, 14 rebounds and 11 assists) but the top scorer for these undefeated Bucks was Jrue Holiday (29 points, 8 rebounds and 6 assists).

Dominican-American Karl-Anthony Towns had 22 points, 11 rebounds and 5 assists in 37 minutes for the Wolves.

Dallas celebrated 111-110 at home with another great night from Doncic (35 points). Campazzo did not add minutes and in Toronto Anunoby scored 27.

Luka Doncic became the second player in league history to score more than 30 points in each of the first eight games of the season.

The Slovenian only has the legendary Wilt Chamberlain ahead of him, who chained eight games with more than 30 points at the start of the 1959-60 season and 23 games with that score at the beginning of the 1962-63 season.

Doncic added this Friday 35 points (10 of 15 shooting, 3 of 6 triples, 12 of 14 free throws), 8 rebounds, 6 assists, 3 rebounds and a block in the tight victory of the Dallas Mavericks against some Raptors in which Scottie Barnes got a triple-double (11 points, 11 rebounds and 10 assists).

The Argentinian Facundo Campazzo had no place in the rotation from Dallas.

When it seemed that the game was going into overtime, the forward appeared (he finished with 30 points) to give the victory to the Trail Blazer who are in second place in the Western Conference.

Along with the Utah Jazz, The Portland Trail Blazers are being the great revelation so far and this Friday they defeated none other than the Phoenix Suns with a shot over the buzzer by Jerami Grant (30 points).

Devin Booker (25 points) and Deandre Ayton (24 points and 8 rebounds) were the best of the Suns who couldn’t beat the Blazers without Damian Lillard and Anfernee Simons and who snatched the leadership of the West from Phoenix.

Utah played a great offensive game and celebrated 130-116 on the road. Markkanen had 27 points in the winner and Westbrook had 28 in Los Angeles.

The Jazz brought the Los Angeles Lakers back to reality, who had won two games in a row but lost to Utah with a poor defensive performance (50.5% shooting from the field and 17 of 40 on three-pointers for the visitors).

Russell Westbrook sealed his best game off the bench (28 points on 9-for-14 shooting and 6 assists) but LeBron James had a poor night shooting (17 points on 7-for-19, 10 rebounds and 8 assists).

Mexican Juan Toscano-Anderson returned to the Lakers after missing several games due to injury and contributed 2 points and a rebound in 15 minutes.

With Ingram as the top scorer with 26 units, the Pelicans won 114-105 against the Warriors, who have 5 consecutive games with losses.

who after six games on the road have not yet won away from San Francisco and this time fell to the New Orleans Pelicans.

Without Stephen Curry, Klay Thompson, Draymond Green and Andrew Wiggins for restthe Warriors had Jordan Poole as their top scorer (20 points and 9 assists).

in the pelicans Brandon Ingram returned, after several games off the court per the NBA’s concussion protocol, and was the best with 26 points.

The Nets beat the Wizards resoundingly with a Durant who was on the verge of a triple double: he added 28 points, 11 assists and 9 rebounds. Claxton was the New Yorkers’ second leading scorer with 18 points.

The Brooklyn Nets put aside the anti-Semitic controversy of the suspended Kyrie Irving and destroyed the Washington Wizards away from home with a great Kevin Durant (28 points, 9 rebounds and 11 assists).

Bradley Beal (20 points) was the most productive of a lousy Wizards from 3-point range (8 of 34).

The Grizzlies largely defeated the Hornets with a great performance from Dillon Brooks with 23 points and Steven Adams, who had 13 points and 19 rebounds.

The game of the Memphis Grizzlies, who passed over the Charlotte Hornets who lost 44 points in the last quarter.

The Spanish Santi Aldama (12 points, 5 rebounds, an assist, a steal and 2 blocks in 21 minutes) was one of the eight Memphis players with more than 10 points while Kelly Oubre Jr. stood out with 17 points for the Hornets.

Boston outscored Chicago 123-119 with 36 points from Tatum and 25 from Brogdon, who came off the bench. The Bulls fell short of DeRozan’s 46 points.

Exciting duel in the East between the Celtics and the Bulls that the Bostonians finally took by overcoming a magnificent DeMar DeRozan and his 46 points.

Jayson Tatum (36 points, 12 rebounds and 6 assists) took a step forward for the Celtics, who also had 11 points, 5 rebounds and 5 assists from Al Horford in 33 minutes.

The Interns had a great night against the Pistons with 44 points between them, and added another victory away from home by 112 to 88. Cunningham contributed 19 for Detroit.

Removing the undefeated Milwaukee Bucks, the best streak in the NBA at the moment is held by the Cleveland Cavaliers, who added their seventh consecutive victory with a win without major complications against the Detroit Pistons.

Kevin Love (21 points, 8 rebounds and 10 assists) and Jarrett Allen (23 points and 7 rebounds) were two towers in the paint for the Cavaliers while Cade Cunningham (19 points) led a Pistons with shooting problems (37 .3% on field goals)

The Brazilian Raul Neto played 24 minutes for the Cavaliers and left a good feeling with 10 points, 5 rebounds, 5 assists and 2 steals.

Julius Randle led New York with a double-double of 17 points and 10 rebounds. Tyrese Maxey couldn’t avoid the fall in Philadelphia despite his 31 points.

With many doubts in these first weeks of competition, the Philadelphia 76ers won by 12 points in the last quarter but they couldn’t beat some New York Knicks who defeated them with a comeback in the last few minutes.

The Pacers started the month winning, improving their record to 4-5, after tonight’s victory where Tyrese Haliburton was the great figure with 22 points, 9 rebounds and the same number of assists.

The Miami Heat isn’t having a good time either, losing to the Indiana Pacers with a lethal trio: Tyrese Haliburton (22 points, 9 rebounds and 9 assists), Buddy Hield (25 points and 9 rebounds) and Bennedict Mathurin (23 points).

Tyler Herro (29 points) was too lonely in a Heat denied from the perimeter (11 of 39 in triples).

Paul George was the figure with 32 points and five assists. Devin Vassell finished with 29 points for San Antonio.

Los Angeles Clippers achieved his third consecutive victory by winning in San Antonio with 32 points and 6 assists from Paul George.

Devin Vassell shone for the Spurs with 29 points.

After Friday’s session, This is how the NBA positions remained in the Eastern and Western Conferences.