The Celtics, forced to respond against the best visitor in history 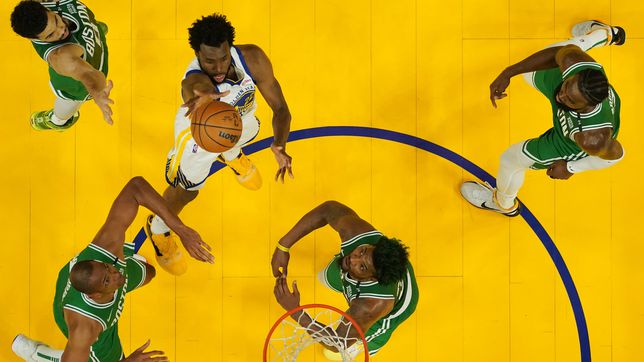 The Warriors have 26 straight playoff ties winning at least one game on the road. The Celtics have, in these playoffs, eight away wins (8-2), just

The Warriors have 26 straight playoff ties winning at least one game on the road. The Celtics have, in these playoffs, eight away wins (8-2), just one short of the record in the same playoffs (the 1995 Rockets, the true kings of the road). However, they have been weak on their track, the roaring Garden, once they got past the opening series against the Nets: 3-4 against the Bucks and Heat. So this third game, the return of the NBA Finals to Boston, is dangerous for Ime Udoka’s men. That, yes, they have not lost (neither the Warriors) two games in a row in the playoffs: 6-0 after defeat with an average difference of 15.5 points.

The Celtics regained home-court advantage with their fourth-quarter comeback in the first game, but were shaken in the second, in which they lost the opportunity to be only the third team in history to win the first two away games in a Finals. Something that only the 1993 Bulls, in Phoenix, and the 1995 Rockets, in Orlando, have done. Both were champions, of course. Steve Kerr responded in Game 2 with adjustments that short-circuited a Celtics who now have to answer now: adjust.

The Warriors changed their defense to avoid the free 3-pointers from the Celtics’ secondaries, the X factor of the first game. Marcus Smart, Al Horford and Derrick White went from 15/23 on 3s to 2/7 in just 72 hours. With Draymond Green throwing Jaylen Brown out of rhythm (3 points and 1/11 in three quarters after 14 points in the first) and Andrew Wiggins making Jayson Tatum sweat, the Warriors’ defense prevailed, with a lot of aggressiveness from the outside to avoid plays near his rim. The Celtics were a terrible 12/30 shooting in the zone in Game 2, going 6/31 shooting from two individually generated, after dribbling. In total, Udoka’s men scored 37 shots from two in San Francisco, the historical minimum in the first two games of a Finals.

The Celtics will also try to avoid the rival’s avalanches in the third quarters: 38-24 and 25-14. And, above all, control losses (18 for 33 points for the Warriors on Sunday). The latter has been a clear thermometer of their performance in these playoffs: when they have controlled those gifts, they have been fearsome because they have not let the rival run and have imposed their suffocating defense, which also has to find new solutions against Stephen Curry, a master when it comes to dismantling any line of protection, including an elite one like these Celtics.

NBA: list of champions by year and winners with all the winners of the ring
Golden State Warriors – New York Knicks, live
NBA PlayOffs 2022: James Harden changes everything
NBA 2864