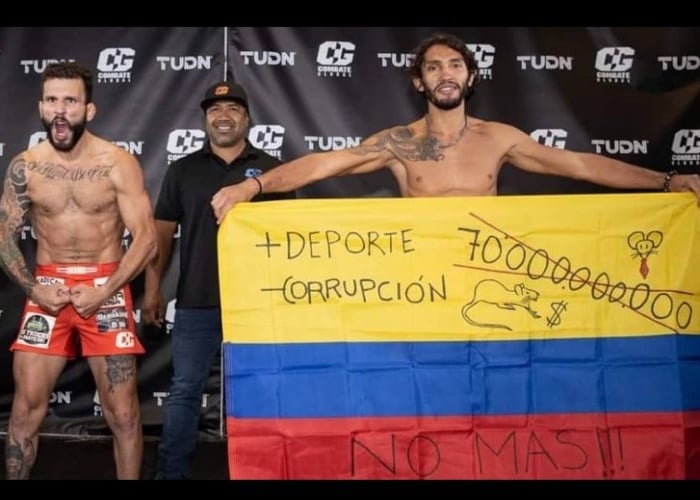 With a painted rat, the flag worn by the Colombian fighter Javier "Blair" Reyes reads the number 70 thousand, referring to the MinTic corrupti

With a painted rat, the flag worn by the Colombian fighter Javier “Blair” Reyes reads the number 70 thousand, referring to the MinTic corruption scandal.

Proud and with a dignified look and at the same time smiling, the Colombian fighter Javier “Blair” Reyes wore a Colombian flag with messages of protest against corruption when he was preparing to face in the lightweight preliminary of the Global Combat in Miami. On the flag are painted rats and in which the number 70,000 is crossed out, alluding to the corruption scandal of the Ministry of Technologies that resulted in the resignation of Karen Abudinen and the slogan “more sport, less corruption.”

In his Instagram account, the fighter wrote: “The Colombian people are already tired of corruption, how is the case that we” abudined “the 70 billion pesos directed at our children … No more rats! More sport, less corruption, from Miami to the world, “he wrote next to the photo of the weigh-in in which he displayed the flag.

This event coincided with the official tour of the Duque government in Spain where it seeks to promote Colombia as a destination for investment and international tourism.

Tags: Las2orillas
Is Brock Lesnar returning to the UFC? Responds Paul Heyman
“They can change MMA forever”: Henry Cejudo pushes for a crossover fight between Kayla Harrison and Cris Cyborg
Former UFC champions star in the first fight in the metaverse
UFC/MMA 844

Loading...
Newer Post
When and who does he fight? UFC confirmed another battle for Argentine Marcelo Rojo
Older Post
MotoGP: Rossi would see a great Bagnaia title with the Ducati