The curses and “omens” that surround the soccer world cups 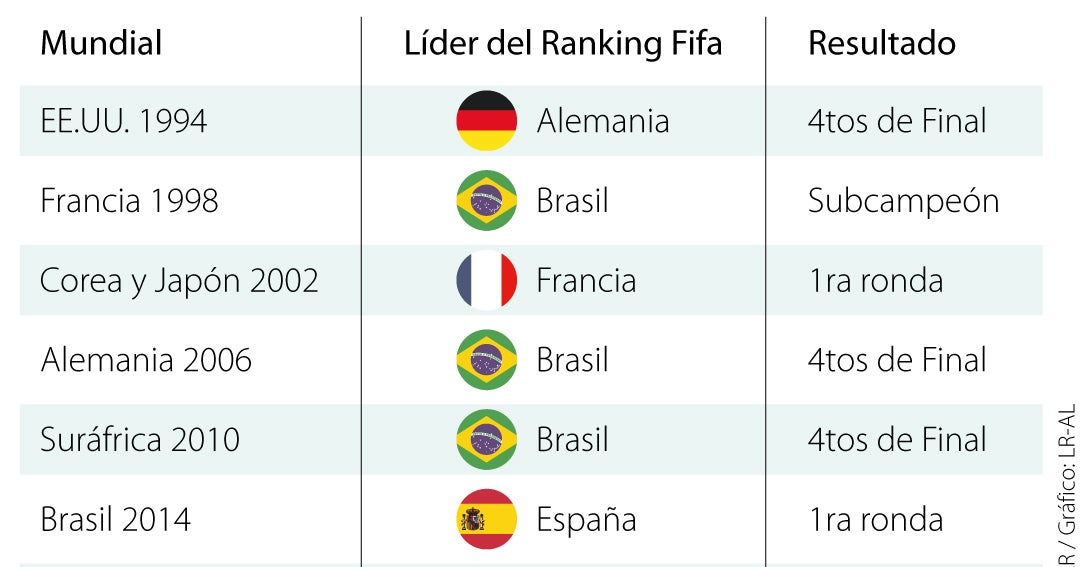 Today begins the twelfth edition of the Men's Soccer World Cup organized by Fifa, which throughout its 92-year history has left many curiositi

Today begins the twelfth edition of the Men’s Soccer World Cup organized by Fifa, which throughout its 92-year history has left many curiosities and, at the same time, curses for the teams that seek to lift the most coveted trophy by any soccer player.

The bookmakers are looking forward to this tournament and many bettors already have their favorites to win the title. Some choose the selection of their preference based on the performance of their players, their performance during the qualifiers, but also according to the streaks and “anti-records” of the countries participating in the contest.

These are some “curses” for some teams that could take away favoritism to win the World Cup in Qatar 2022.

Fifa prepares a monthly ranking of teams in which it measures their performance in friendly matches and official competitions. The ranking has been gaining importance since it can define the seeded teams in the draws for the group stage of the World Cup.

But since this ranking was made 30 years ago, the team that arrives as the leader at the World Cup has not managed to become champion. On this occasion, Brazil would be affected by this curse. Although the “verdeamarela” is one of the biggest favorites to win her sixth title, she will have to break this losing streak to achieve it.

The team led by Tite, who qualified for the World Cup after sweeping the South American qualifiers without losing a single game, surpassed Belgium in the rankings on the last Fifa date after beating Tunisia 5-1, while Belgium lost 1-0 against the Netherlands.

No team with a foreign coach has won the World Cup

Another particular characteristic that has surrounded the World Cup champions is that they have all had local coaches.

Although the Colombian National Team had its best participation in World Cups with a foreign coach like José Néstor Pékerman in 2014 and 2018, the chances that the national team would have won the World Cup were reduced if this key aspect is taken into account for the superstitious.

A Selection has not repeated a title for 60 years

Since the Brazil of Garrincha, Vavá, Didí and other historical soccer super stars managed to be World Champion for the second consecutive time in Chile 1962, no other team has been able to repeat the world title.

This curse falls on reigning champions France, despite being one of the top favorites to win the title with greats like Real Madrid star Karim Benzemá and PSG idol Kylian Mbappé.

Another anti-record that falls on the French team comes from one of its main figures. Karim Benzemá arrives at this World Cup as the brand new winner of the Ballon d’Or, the recognition given to the best player in the world by the specialized magazine France Football.

Since this individual award was given to soccer players in 1956, none have managed to win the Soccer World Cup after receiving the award.

The Copa América champion does not triumph in the World Cup

This seems to be the last chance for Argentine star Lionel Messi to lift the coveted World Cup, the only title that has eluded one of the best players in history, after winning the Copa América, his first title with the Selection of Argentina.

But the former Barcelona will have to break one of the curses that the World Cup brings, and that is that no South American team that wins the continental tournament has been able to do the same in the World Cup.

In the southern cone, only Brazil, Argentina and Uruguay have managed to proclaim themselves world champions, but their titles did not come when they won their respective Copa América.

The team that beats Mexico does not win the World Cup

Mexico brings a curse to this World Cup in Qatar by having a foreign coach, as previously stated, no team has been able to win a World Cup without a local coach. But the “Manito” team has its own curse.

No team that beats this team can lift the Cup in that same edition. It happened to Brazil, the Netherlands and Argentina, despite arriving as favorites in the contest. On this occasion, Mexico shares a group precisely with Argentina, Poland and Saudi Arabia.

Tags: Building, Gastronomy, Transportation
The figures of the stars of soccer and reggaeton: who earns more?
The curses and “omens” that surround the soccer world cups
This is what the single-seaters of the candidates for the Formula 1 world championship look like
FOOTBALL 4287

Loading...
Newer Post
Vandoorne joins Aston Martin
Older Post
BOOMBASTIC ASTURIAS TICKETS | The Boombastic puts the tickets for the next festival on sale: this is the date on which you can buy them