The Eurobasket says goodbye to the Big Three of the NBA 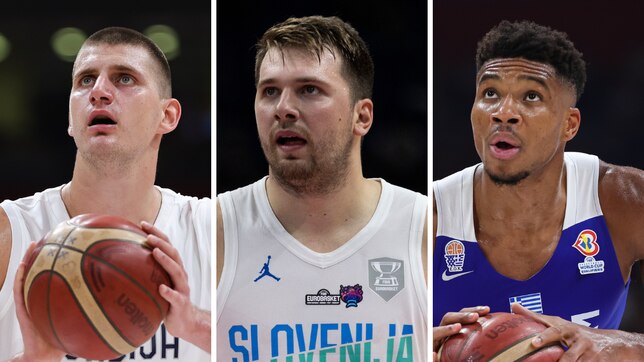 Surreal. surprising. Unexpected. Exciting. This is how Eurobasket 2022 is being, a tournament in which nothing is going as expected. Giannis A

Surreal. surprising. Unexpected. Exciting. This is how Eurobasket 2022 is being, a tournament in which nothing is going as expected. Giannis Antetokounmpo, Nikola Jokic and Luka Doncic, three of the best players in the world, in the NBA, and if everything continues like this also in history in the not too distant future, have said goodbye to continental competition through the back door. The Serbian did it in the round of 16; Greek and Slovenian lasted one more round, but said goodbye in the quarterfinals. None of them will fight for the medals even though they led three favorite teams for gold. A resounding failure for the three teams and the three stars, two of them with a manifest impossibility to succeed in FIBA ​​matches (Giannis and Jokic) and the other (Doncic) who won in 2017 but who comes out very touched and singled out.

France is the only one of the theoretical favorites that is still alive in the tournament, and it does so in an absolutely bizarre way. It seems that their story was written by Woody Allen for Match Point, since luck has allowed them to survive in an extremely strange way and twice: missed free throws by Turkey and Italy gave them a life in the round of 16, and another in the quarters. And the defeat of Slovenia leaves them the crossing, on paper, more affordable in the semifinals: that of Poland. A situation that gives both the French team a chance… and the Poles, of course. On the other side, you know: Spain is at stake against the hosts, Germany. The party promises.

Neither Giannis nor Jokic have had a bad tournament from a statistical point of view: the Greek has gone to more than 29 points and 8 rebounds per night. The Serbian, more than 21 and 10 rebounds. Neither of them was to blame for the defeat of their respective teams… but, at the moment of truth, neither was the solution. Doncic’s case has been even worse: more than 26 goals per night, but a lot of controversy about his physical condition, ankle problems in the quarterfinal match against Poland and a goodbye that has been accompanied by his expulsion for fouls, a series of unparalleled protests at the end and 14 points with 11 rebounds, but 5 of 15 in field goals and 6 turnovers. The worst possible ending.

In other words, the NBA has failed to succeed in the Eurobasket. The farewell of the Big Three is joined by the farewells of many other players from the best League in the world: Spain eliminated Jonas Valanciunas, Domantas Sabonis (Lithuania) and Lauri Markkanen (Finland). Goran Dragic, Doncic’s partner in Slovenia, has also left. Jusuf Nurkic has done the same with Bosnia. Many casualties and many surprises in a tournament in which Willy and Juancho Hernangómez, Usman Garuba, Daniel Theis, Rudy Gobert, Evan Fournier remain alive… But in which the Big Three are missing: Giannis, Jokic and Doncic. Three stars that came to conquer Europe and that, in the end, have crashed.

NBA PlayOffs 2022: Tatum’s brutal kill against the entire Bucks defense: Top!
Good minutes for Vildoza and Bolmaro in the NBA | The one from Milwaukee fared better than the one from Utah in the Summer League
NBA Basketball School RD takes its camp to Cap Cana
NBA 3438