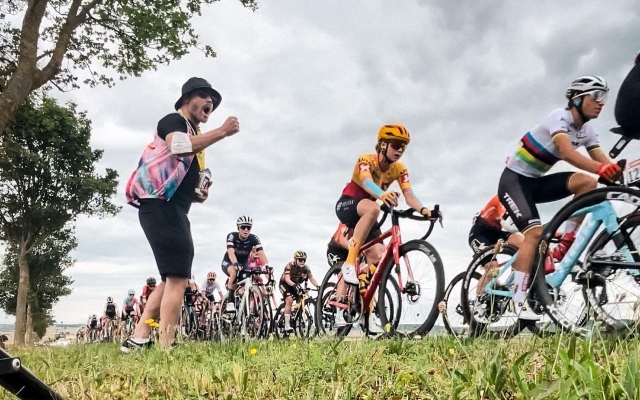 The return of the women’s Tour de France has generated great expectation. There have been many fans who have come to the ditches to see the runners go by in the first stages. The public, for now, has responded. Cyclists too. And among all these spectators, some illustrious faces, such as a current Formula 1 World Championship driver.

The Finnish pilot of the Alfa-Romeo team, Valtteri Bottas, has been seen in the first stages of the French women’s round. After contesting the French Grand Prix at the Paul Ricard circuit and finishing fourteenth, the Finn made a “stopover” in the Women’s Tour before heading to the Hungaroring. Bottas has taken advantage of this short break in F1 to be close to his current partner, the Australian runner, Tiffany Cromwell.

In fact, we have seen Bottas as if he were another assistant to the Canyon//SRAM Racing team. In fact, in one of the stages he gave Cromwell herself a jerry can and also went to the team bus.

“It was great to witness this incredible event over a couple of stages. If you didn’t go this year, make sure you don’t miss the next Women’s Tour de France. I am very happy to see that women’s sport finally receives the exposure it so deserves! ”, The pilot, who also practices cycling in his spare time, wrote on his social networks.

Tiffany Cromwell has spent seven seasons with Canyon//SRAM Racing and more than a decade as a professional rider. The Australian, born in Stirling, started out as a cyclist at school and thanks to a talent identification program, he made the leap. Since then, she has won nationally in Australia and also in Europe, with two stages in the women’s Giro d’Italia and the Belgian Classic Omloop Het Nieuwsblad, among other triumphs.

Valtteri Bottas is not the only one who has come to encourage his partner during the course of the test. Also the current runner-up of the Tour de France, Tadej Pogacar, was seen in the second stage to support his partner, the Team BikeExchange cyclist and double Slovenian time trial champion, Urška Žigart.

A Tour that leaves us images to remember

The renewed women’s Tour de France is leaving us with great images and highly contested stages, in addition to prolonging its relationship with Denmark thanks to the victory of the Danish rider of the FDJ – SUEZ – Futuroscope team, Cecile Utrup Ludwig.

A victory that will remain in everyone’s memory due to the statements made by this runner after the stage, in which she burst into tears as a result of emotion. “We made a great comeback after yesterday was a shitty day,” Ludwing said.

🎙 Hear from 🇩🇰@CUttrupLudwig after her victory in Épernay.

But it is not the first time that the Danish runner delights us with her post-stage statements. Who doesn’t remember those explanations at the 2019 Tour of Flanders, after finishing third?

Other images that this women’s Tour de France has left us with, for the time being, have been seeing one of the greats of this sport, Marianne Vos, with the leader’s yellow jersey; the eventful day that the Spanish Mavi García lived in the stage of the “White Paths” in which she suffered two punctures and went to the ground after colliding with her own team car; or the superiority in the sprints of the DSM sprinter, Lorena Wiebes.

Television audiences also accompany. The France 3 channel, for example, which broadcasts the women’s Tour de France together with Eurosport, is usually the leader in the afternoon and has even surpassed audiences of the men’s Paris-Nice or the Dauphiné, with 3 million viewers on the first Sunday ( 27.8% audience share), 1.7 million on Monday or 2 million on Tuesday.

Eight days will be short.