The five debuting quarterbacks in the 2021 NFL playoffs 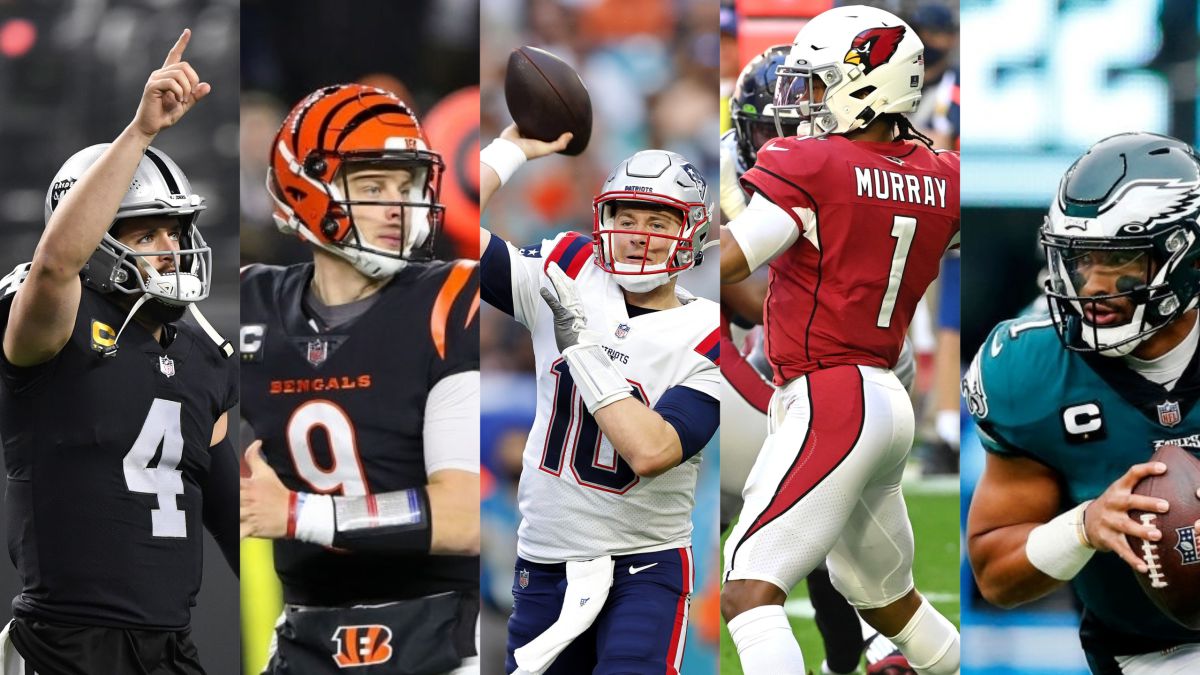 The five debuting quarterbacks in the 2021 NFL playoffs

The 2021 NFL season playoffs they are a few days away from starting and one of the most surprising data is the number of quarterbacks that will debut in that instance.

For the American Conference, the debutants will be Derek Carr, of the Las Vegas Raiders; Joe burrow, of the Cincinnati Bengals; and mac jones of the New England Patriots. Carr and Burrow will square off in Game 1 of the Wild Card, while Jones will visit Buffalo to play the Bills.

Meanwhile, in the National Conference only two elements will debut: Kyler murray, of the Arizona Cardinals, and Jalen Hurts, of the Philadelphia Eagles. Both Murray and Hurts will have tough matchups in the Wild Card Round as they face tough teams led by Matthew Stafford and Tom Brady, respectively.

Derek Carr is the most experienced to debut in the postseason. The 30-year-old was selected in the second round of the 2014 Draft and is in his eighth season as a professional.

The youngest of the Carr brothers could have played in the postseason during the 2016 campaign, in the Wild Card round against the Houston Texans, but a leg fracture prevented it. His place was taken by Connor Cook.

For life, the Fresno State alum has recorded 31,700 yards, 193 touchdowns and 85 interceptions after completing 65 percent of his shots in 127 professional games.

After being drafted with the first overall pick in the 2020 Draft and overcoming knee ligament surgery, Joe Burrow will make his first playoff appearance at age 25.

The Ames, Iowa native has shone in 2021 by throwing for 4,611 yards, 34 touchdowns and 14 interceptions. In addition, he has completed 70.4 percent of his shots and led the Bengals to their first division crown since 2015.

Of the rookie quarterbacks in 2021, Mac Jones was the one who got to the best possible situation by being drafted by Bill Belichick and the New England Patriots. The freshman will get a golden opportunity when he faces the Bills in the Wild Card round.

The Alabama product, who turned 23 on September 5, had 3,801 yards, 22 touchdowns, 13 interceptions in his rookie year under an offense where the running game dominated.

Murray is in his third season as a professional after being selected with the first pick in the 2019 Draft. After winning Offensive Rookie of the Year and two Pro Bowl nominations, the 24-year-old Murray is poised to make his playoff debut..

The Oklahoma alum has 11,480 yards, 70 touchdown passes and 34 interceptions in the air and has 1,786 yards and 20 career rushing touchdowns.

The last rookie is Hurts, 23 years old, who was part of the Alabama college program alongside Mac Jones. The native of Houston, Texas got the start in Week 14 of the 2020 season. Since then, he has appeared in 19 games and has won nine of them.

Hurts is the main offensive weapon of Nick Sirianni’s team since in addition to being the starting QB, he is the team’s leading rusher after accumulating 784 yards and 10 touchdowns in that way. In his second season he completed 265 of 43 throws for 3,144 yards, 16 touchdowns and nine interceptions.

these are all the premieres of november
NFL: Betting, Predictions and Odds for Week 8 Games
Vikings thwart new Steelers win at last minute
NFL 176