The five most lucrative fights in boxing history 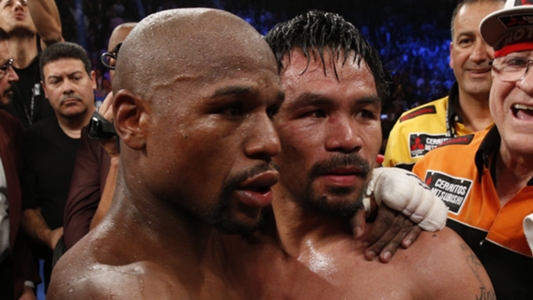 The success of pay-per-views and the rise of celebrity boxers mean that some fights can generate hundreds of millions in a single night. Over the

The five most lucrative fights in boxing history

The success of pay-per-views and the rise of celebrity boxers mean that some fights can generate hundreds of millions in a single night.

Over the years, there have been some big events for promoters, venues, fighters and broadcasters. At DAZN News we take a look at the five biggest fights in history financially.

Note: Figures are based on what has been reported through multiple sources and do not take into account non-professional matches:

The “Fight of the Century” is the fight that has generated the most money, at least for now.

The 2015 fight benefited from the hopes and expectations of fans who had long been looking forward to a showdown between two of the biggest names of the moment.

Although the anticipation for the fight was huge, the fight itself was something of an anticlimax, with Mayweather winning on points without much drama, including the announcement of the result.

However, the expectation was enough to achieve those numbers as 4.6 million pay-per-views were sold and tickets for the MGM Grand Garden Arena for the public started at a cost of $1,500.

Dubbed “The Money Fight” once it was announced, it’s no surprise to see Mayweather appear on this list again, for his fight with Conor McGregor at the T-Mobile Arena in Las Vegas.

The Irishman paused his stint in the UFC for the occasion, allowing Mayweather to wrap up his professional career with victory number 50, which came relatively easily.

Mayweather keeps hinting at a return to the ring, at least for an exhibition, and given the sums he’s generated, it wouldn’t be surprising.

Mayweather again, this time against one of the biggest fighters of the moment.

In 2013 Canelo was not the superstar, nor was he as accomplished as he is now. Mayweather won on points again, in an event that drew more than 16,000 fans to the MGM Grand.

It may not be surprising to see Mayweather’s name again, given his dominance of the sport of boxing and his popularity with fans who were willing to pay to see him in action.

Yet in 2007, Oscar De La Hoya was arguably the biggest name, and that was reflected in the Golden Boy’s purse, which was once more than double Mayweather’s.

Although De La Hoya took most of the money, it was Mayweather who took the victory and established himself as the star of the moment.

A rarity: An event on this list without Mayweather. Incredibly, boxing existed before he came on the scene and we can go all the way back to 1997 to find the fifth highest grossing fight of all time, held again at the MGM Grand Garden Arena.

The fight in question is the rematch between Evander Holyfield and Mike Tyson, and fans may consider it a time to remember, if not for the right reason.

Tyson was stopped by Holyfield in 1996 to set up a rematch, but the rematch ended in controversy and more or less ended Tyson as a serious figure in the sport. The former world heavyweight champion bit Holyfield’s ear, not once, but twice, and was disqualified for it.

On the pay-per-view front, it was much more successful, selling almost two million.

Men’s boxing: Juan Cruz Saucedo vs. Santiago Fernandez
Canelo vs. Bivol: When and where to watch the Mexican boxer’s fight LIVE
Jake Paul resolves his rivalry with Woodley with a brutal KO
BOXING 3166

Loading...
Newer Post
What is the speed record that Formula 1 has?
Older Post
MMA Powerhouse Wants To Rip Mike Tyson’s ‘Heart Out & Tear It To Shreds’