The Garden devours the Warriors 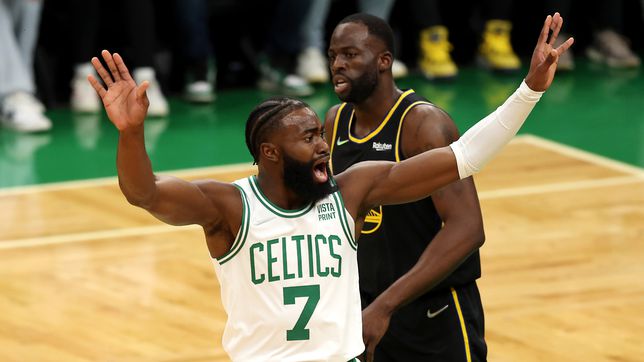 Welcome to the North End of Boston, at 100 Legends Way. Welcome to the Garden. Twelve years later, the NBA Finals returned to one of its premium

Welcome to the North End of Boston, at 100 Legends Way. Welcome to the Garden. Twelve years later, the NBA Finals returned to one of its premium stages, to one of the places where the history of the League has been written. Just inches from the old Garden, the place where the Celtics won 16 of their 17 rings. Eight in a row, eleven in thirteen years. Where green pride was born, where professional basketball discovered its mystique, its first narratives. On nights like this, when the season is on the line and glory is at hand, the TD Garden is the old Garden: loud, edgy: hostile. A bonfire where the dreams of rivals burn and in which Red Auerbach, Bill Russell, John Havlicek, Larry Bird warm their hands. When the illustrious family ghosts come to life, the visitor is in for a bad night. It is always so. The Warriors learned it the first time, in the Finals premiere in the Atlantic: 116-100 and 1-2 for the Greens.

The Warriors, of course, have their own history. They are, like the Celtics and Knicks, one of the original franchises in the League. In fact, they are the first champion (1947) and the last great dynasty, one whose validity will undergo a very serious examination tomorrow. We’ve seen this team get out of situations like this a thousand times. Change dynamics, silence the stands, freeze hell: 26 knockout games in a row winning at least one game away from home, something that no one else has done and that is, right now, the X factor of the Finals, the axis of the coordinates of a fight for the ring that has consumed three chapters. The Warriors also haven’t lost two games in a row in these playoffs (5-0 after loss). The Celtics were in those too (7-0 now). And they answered. Morning? We will see.

The Warriors have to hold on to that data that threads their competitive gene, meet again in time as they have done so many times. Because the alternative, if not, is the Garden. With that vintage replica of its 264 red oak plates. Leftovers from sawmills in full scarcity after the Second World War that make up a unique parquet, sewn together with 988 screws and which has served as the grave of many of the best teams in history. Another one of those, perhaps the best, is now in town. The first visit to the haunted mansion, to this TD Garden that takes out the crockery and rugs from the old Garden, was a disaster for a Warriors who lost all momentum from their spectacular sprint in Game 2. The old mystique devoured the winner 2.0.

The Celtics respond on all fronts.

The Celtics won resoundingly. By land, sea and air. At times, they overwhelmed. They were a couple fewer losses and a couple better Jayson Tatum decisions away from a blowout. And yet, they lacked top speed and precision to not leave the game so alive at halftime (68-56) and courage to avoid another nightmare, for the third night in a row, in the third quarter: from 77-64 to 82-83 , an unlikely away advantage with Stephen Curry dancing in the spaces that Udoka’s defensive plan decided to grant him. But the Celtics, even if they went from paying homage to green to suffering, or precisely because of that, added an invaluable victory in a new script twist in a Finals that is going to swerve every night. Who will be the first to manage to stay the course two games in a row? If it is the Celtics, tomorrow, they will have three match points, a 1-3 that only one team has lost in the fight for the title: these Warriors, of course, in 2016 and in their case also with home court advantage. A Celtics win tomorrow will ultimately sound like match-ball.

The Warriors came back 18 points (54-36 in the middle of the second quarter) but finally paid for the ballast accumulated in an improper start, unexpected for a team with their experience and armor. The Celtics responded with solutions for everything that had plagued them on Sunday: more aggressive penetration to generate free throws, more points in the zone, command of the rebound, fewer minutes with two big interiors and another seismic first quarter from a Jaylen Brown with traces of MVP: 17 points, 5 rebounds, 3 assists and a 3/4 in triples in those first twelve minutes (he finished in 27 + 9 + 5). Stronger, more agile, much more concentrated, more collective and with more shot and an impeccable collection of easy points in the area and attack rebounds: a crush (26-11 in 8 minutes, the aforementioned 54-36…). The exceptional response of the Celtics after defeat, the true hallmark of this team, paired for almost the entire first half with a transparent presence of the Warriors. No ideas, no intensity, no legs. Incapable of not losing the thread in defense, with embarrassing imbalances and too many minutes of laziness, of silence before the roar of their rival. However, the worst thing for them is that they had a silver bullet in that furious third quarter in which they came to take the lead. But they wasted it without hardly putting up a fight. Very bad sign.

From the 93-89 to which the Celtics had clung to close that bad drink in the third quarter, it went, in a seen and not seen, to a 102-91 that was no longer followed by any mystery. Heroic baskets (24 points, finally) outweighed Marcus Smart’s gross mistakes (5 turnovers). And Jayson Tatum, after a rough stretch and putting his hand on his shoulder again, was fine-tuning his wrist and ended up taking over from Brown: 26 points on 23 shots, but a trickle of individual actions when things were worse and 9 assists. Grant Williams shone in his role as the glue of the smaller quintets… The Celtics were much better when they sent and, above all, they returned every hit from the Warriors, with maturity and integrity. There, in that resistance when they could have frozen at the sight of each other, they were able to win much more than a game. We will see.

The Warriors were waiting for Klay Thompson. And, after a bad start, Klay appeared (25 points, 5 triples). In fact, the reaction of Steve Kerr’s men sounded like a story a thousand times seen: a spark (not much more) from Draymond Green in defense, secondaries at the right time and in the right place (this time Otto Porter) and the triples of the Splash Brothers, Klay and a Curry who finished with 31 points and a 6/11 beyond the line of three. This time, it was not enough. The Celtics, between the end of the third quarter and the beginning of the last, turned the 82-83 rebellion into that already perfectly manageable 102-91. They won twice, when they wrote the script and when they had to make corrections and footnotes in the rival’s. The Warriors, if anything, have shown that they are there, one step away if they simply don’t give away land, minutes and ocean advantages. But they ended as they began: very badly. worse. Tomorrow they play for their legacy and for the Finals, they play so as not to see themselves in the ditch at 1-3. They play where they have played many times and where they have built their legend. And they do it, precisely, in that machine for generating narratives and raising altars that is the Garden. Tomorrow we will know if it will elevate them or bury them, but now the inertia is green. Again.

Loading...
Newer Post
Boxing: scar de la Hoya: “Hearn did not respect Canelo lvarez when he faced him against Bivol”
Older Post
‘boxing and Salsa’ in honor of Dad there will be this June 18