The golf sector is looking for new followers among Murcians 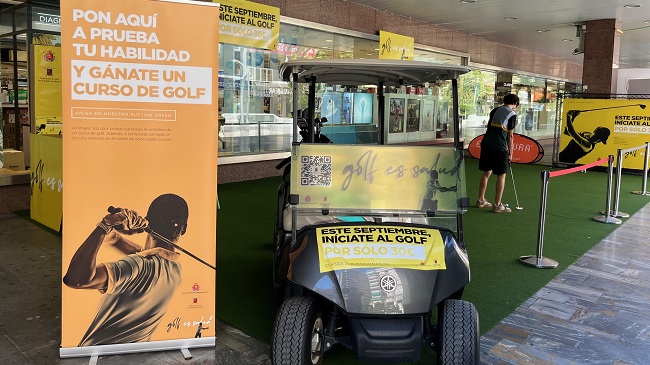 Golf in the Region of Murcia is in fashion. This sport continues to gain followers, showing that it is neither for the elderly, nor for the rich

Golf in the Region of Murcia is in fashion. This sport continues to gain followers, showing that it is neither for the elderly, nor for the rich, nor only for men and foreigners, but for society as a whole. The Regional Golf Federation works to demystify those taboos that weigh down the sector and promotes the search for hobby among Murcian men and women. Thus, in order to arouse their interest in this sport, it has installed a Putting Green in the heart of the city, in Plaza Fuensanta, next to the main door of El Corte Inglés, so that anyone who comes up to put the place to the test and choose to win one of the four courses that are raffled on its MontePríncipe Golf course.

In addition to this Putting Green, in this space they can get on a buggy to take a photo in a very special photocall and clarify all your doubts with the help of the Federation staff.

In this way, the Federation continues to promote awareness of the benefits of this sport in the Region of Murcia in order to expand the pool that is giving so much satisfaction. In fact, in this 2022 His students continue to excel at the national level with different recognitions, as is the case of Luna Isabella Valencia, who won gold a few months ago in the Spanish Junior Women’s Championship. Bruno Quinto is added as runner-up of the Spanish male alevín, who played against the 90 best in Spain.

Another sample of this quarry that the Federation has is Adrián Cano, who is part of the top 10 of the Spanish Championship, specifically he is fourth in the male children’s category; Bruno Machalica, fifth classified in the Spanish Championship; Juan Martinez, who occupies position number 17 of 92 players; o Paula Pardo, who got the 12th position, followed by Mia Ingham 19th position and Daniela Gallego 39th position.

‘Sold out’ in the new course

To opt for these courses subsidized by the Golf Federation of the Region of Murcia and the Spanish Golf Federation, users must be over 18 years of age and cannot have had a golf license or have participated in previously subsidized introductory courses. The course consists of two hours a day of practical training for three weekends, delving into this sport with qualified instructors. It includes all the necessary material for the course, as well as the free license from the end of the course until December 31, with the possibility of registering for student tournaments.

Tags: Golf, Newspaper, murciaeconomy
The NBA is among the leagues that move the most money, with US $ 66,050 million
Colombian players with the best valuation for international football
Dwayne Johnson’s Sneaker Brand Signs Multi-Year Deal With UFC
GOLF 1501

Loading...
Newer Post
MMA: Tyson Fury does not dare with Roman Reigns
Older Post
F1: Ferrari is still in a bad streak, look what happened to it now