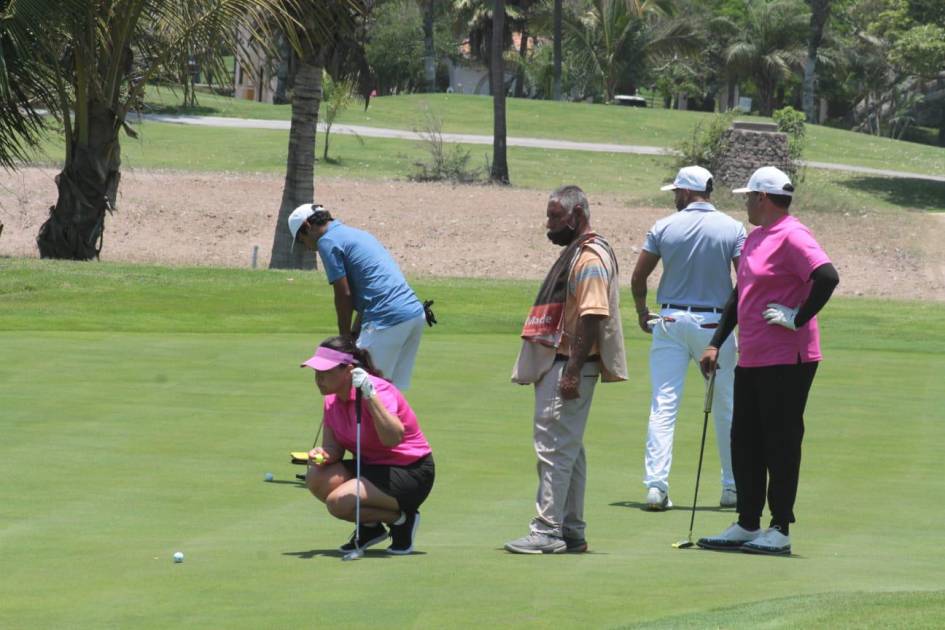 MAZATLÁN._ The couple made up of Lulú de Higuera and Jovany Higuera won the championship within the First Alhma Medical Center Golf Tournament 20

MAZATLÁN._ The couple made up of Lulú de Higuera and Jovany Higuera won the championship within the First Alhma Medical Center Golf Tournament 2022, which was held this weekend in the port.

The facilities of the Estrella del Mar tourist complex became the stage in charge of hosting the first edition of this great competition, which brought together great exponents within local and national amateur golf.

At the end of the course during the 18 holes on this second day of activities, the champion teams were defined within the categories ‘A’ and ‘N’, summoned in this competition.

Within Category ‘A’, the team made up of Lulú de Higuera and Jovany Higuera closed their participation with great determination, accumulating a total of 124 points, to stay in first place.

The Higueras showed their best game techniques, in order to be able to place themselves at the top of the table and thus beat their rivals, who despite having shown a good game, could not catch up with the champions.

Those who were able to reach the winning duo were Emilio Cisneros and Bertín Ángeles, who also finished with a total of 124 registered hits, but due to a tiebreaker criterion established by the tournament, they stayed with the second position.

In third place were Ricardo Duarte and Pablo Rosas, who closed with a total of 126 hits, followed by Martín Narváez and Santiago Sánchez with 127 hits, and finally, in fifth place were Francisco Rocha and Jesús González with 128 points.

Within Category ‘B’, the couple that took first place was Eduardo Lizárraga and Rosalío Lizárraga, who after two days of exciting games accumulated a total of 59 shots.

Behind the Lizárraga duo, Humberto Sánchez and Francisco Ortega finished in second place, finishing with a total of 65 hits, followed in third place by Humberto Ceseña and Jaime Ceseña, with 56 points.

Marco Beltrán and Martín Banda finished in fourth place with a total of 66 shots, while the duo made up of Henry Zapata and Roberto Watson finished in fifth place, culminating in 61 shots.

At the end of the activities, the closing and award ceremony of this tournament was held, where the main organizers of this competition were present, as well as some directors of Alhma Medical Center.