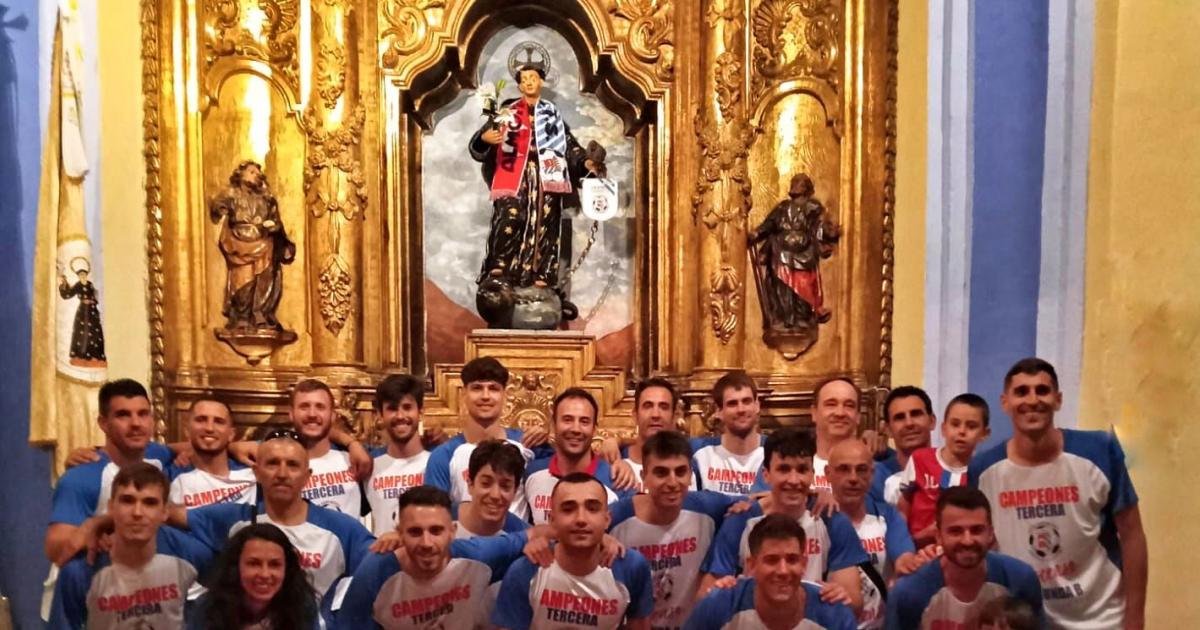 After four seasons giving the best of themselves in the Third Division and after having been at the gates last year, this time they have succeeded. The Almonacid de la Sierra futsal team is Already from Second B.

The whole of this town of Valdejalón of about 600 inhabitants thus makes the leap to the national scene and, next season, will bear the coat of arms and name of the town for much of the Iberian Peninsula. “If we were already a small and humble team in third, now we will be even more”, assures Jaime Ramírez, assistant coach of the Almonacid FS Solceq.

In the regional league competition, those from Almonacid have faced other Aragonese teams from larger towns, such as Ejea de los Caballeros or Sabiñánigo, with players who even get paid to play. This is not at all the case of those from Valdejalón, who are kids between 19 and 30 years old from the town who go out to win but play for pleasure. Many live in Zaragoza for work or studies but two days a week they go to training and the weekend to the game.

“We are a pineapple and as good players as people”

If you ask them what has been the key to their success, they are clear: “We are a pineapple and as good players as we are people.” And it is that the team has spent years with, practically, the same components, forming a consolidated group that understands each other perfectly on the pitch and also off it. Added to this perfect gear is the good harmony between the board of directors and the coaching staff, all rowing in the same direction.

The result could not have been better. “The one to follows her, get her. In 2018 we went up from the Autonomous Region to the Third Division and after four years doing things well, we have reached Second B”, summarizes Ramírez. For personal reasons (he has recently become a father), this season he decided to stay in the background because he was not going to be able to dedicate himself one hundred percent to his team.

The Almonacid team, in Borja, just after winning the match that gave them the pass to Second BHE HAS

The arrival of a new coach, Juan Carlos Sánchez, and two more signings have been the only changes. Sánchez is from La Almunia and had previously directed the Almonacid team. “Taking this group of players so eager to learn and work has been easy and I can only thank them. We have had a wonderful season, conceding only five defeats and being the team with the fewest goals against (74) and the most for (199). The category has been very even due to the level of the rivals and everything was resolved on the last day”, summarizes the coach.

A last day that ended with an epic victory. Already from the first days of the championship, Almonacid FS Solceq was positioned among the top five places and it was soon seen that these were the teams that would play for promotion. Last year, due to the health crisis, two groups were formed, so a ‘play off’ had to be played to determine which team went up. This season, things are back to normal and whoever wins the league will be promoted. “In the last days, mathematically it could only be us or Borja and, as fate would have it, we risked everything in the last game, facing them at home”, says Ramírez, who confesses that if he had had to write the script for his perfect sports career, it would have been like this.

Those of Almonacid, who could only have 5% of seats, arrived with just 30 fans to a Borja pavilion filled to the brim. Their rivals had prepared the game thoroughly and played with the advantage of playing at home, supported by the public. But the visiting team did it. Almonacid FS Solceq won 1-7 against the local team and was proclaimed league champion, thus earning their ticket to Second B. “It is an inexplicable feeling and a pride to be able to carry the shield and the name of my people through half of Spain. It is something that I would never have imagined”, assures the player Pedro Ramírez (Pedrito). Although in his case it is not the first time that he has risen in category with a team, this time it is with the one from his town and he confesses that he is still assimilating it.

The captain of this team so made and shot is Jorge Sáenz. “If they told us two years ago that we were going to achieve it, we would have thought it was impossible, although it is true that a lot of good work has been done in recent years.” In his feat he does not forget the fans and the financial support of the sponsors and collaborators. “This is also theirs,” she adds. If the team is grateful, the feeling is mutual.

“The fans, which in the end is the whole town, is always committed. This is also theirs”

“The fans, which in the end is the whole town, are always dedicated. The day of the promotion they put scarves and team flags on the balconies and they welcomed us with a big banner at the entrance”, recalls the assistant coach excitedly. That same day, just a week ago, the players went around Almonacid whistling with the cars and, coinciding with a jotero festival that was being held, they received an ovation and a jota was sung in their honor.

With everything that has happened still very recent and emotions running high, this humble team takes advantage of these weeks to rest and gather strength for what awaits with the new season. The change is going to be important will make the leap from the regional to the national scene, having to travel to the Basque Country, Navarra, La Rioja, Castilla and León or Madrid, in addition to Zaragoza. This also means that the budget will triple, being able to be around 20,000 euros. But there is something that will not change, the desire, the effort, the camaraderie and the feeling of belonging and love for their people that unites this team. It is what has made them get to where they are and, if we had to talk about a formula for success, that would be the Almonacid FS Solceq.

Tags: humble, saw, Ascent
There are already prices for subscriptions and tickets for the Final Phase of Ascent of the City of Huelva | Huelva24
Tickets for the final phase for promotion to the LEB Plata are on sale
Versus / At 43 years old, “Rambert” reappears with a goal in Paraguayan soccer
FOOTBALL 3181