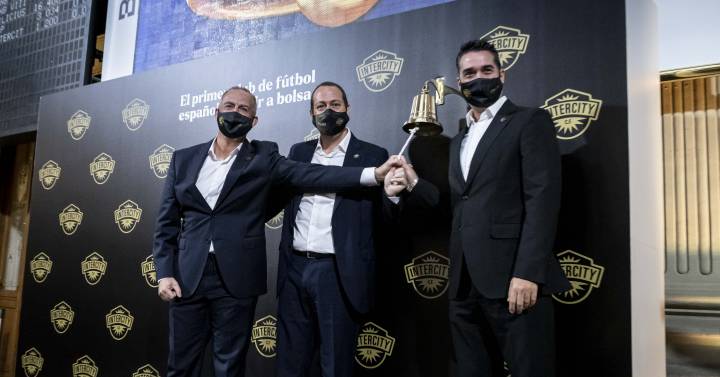 Spanish football debuts on the Stock Market. The CF Intercity debuted this Friday on BME Growth, the old MAB, with a 40% rise to 1.68 euros. The

Spanish football debuts on the Stock Market. The CF Intercity debuted this Friday on BME Growth, the old MAB, with a 40% rise to 1.68 euros. The result achieved has not been without obstacles. On its first day in the market, the number of buy orders was much higher than the sell orders. This Friday’s is the first Spanish soccer team listed on the market after passing through the Pre-Market Environment. Its capitalization exceeds 7.5 million euros.

Intercity’s IPO price was 1.2 euros per share, which “coincides with the one agreed in the latest corporate operations carried out by the company just before its incorporation to the market.” The club’s capitalization, with just over 4.6 million shares, started with a capitalization of 5.55 million at 1.2 euros per share. Deloitte will be your registered advisor, while GVC Gaesco Valores will act as your liquidity provider.

The club, which has 320 shareholders after the capital increase prior to listing on BME Growth, was born after an agreement with the GCD Sant Joan in June 2017. It is then that the sports limited liability company for this sporting, economic and social that came to light in November 2020, when Salvador Martí and Javier Mira founded the SAD CF Intercity, and opened it to new shareholders.

President Salvador Martí stressed that “today we become pioneers, setting trends, and discovering paths for all those who come later. The arrival of the team at BME Growth gives an idea of ​​the levels of rigor and seriousness associated with our project. Listing here says a lot about the transparency and trust that we have demanded to offer ”.

The Intercity is in Second RFEF (Second B) and has an annual budget of 1.5 million euros, being the highest capital of each of the groups in which it competes. This leap to the floor allows atomizing the shareholding and thus avoiding that there is not a single investor who supports the financing and the future of the club. “Within the DNA of the founders of Intercity, innovation and disruptive projects have always been present, something that we wanted to be present when creating the new club. Today’s milestone differentiates us and makes us more competitive, ”says Martí.

In Europe, a large group of soccer teams are listed on the stock market. For example, in Italy Juventus Milan is listed, which fell 14.19% in the year, and those ofl Lazio, up 0.18%. On the French market the Olympique lyonnais, which gained 2.78%. And on the Dutch Stock Exchange, Ajax, which fell 7.45%.

Salvador Martí, president of CF Intercity and shareholder of FacePhi, another listed company of BME Growth, has assured that “we are making history. We are convinced that going public is good for a football club, as fans become shareholders. Our goal is for the club to be sustainable ”.

The Pre Market Environment is a BME program that accompanies companies on their way to the stock markets with training and helps them adapt to make the leap. Currently there are 16 companies in this initiative and another 15 partners that help in the formation of the companies.