The Lakers are a practical joke 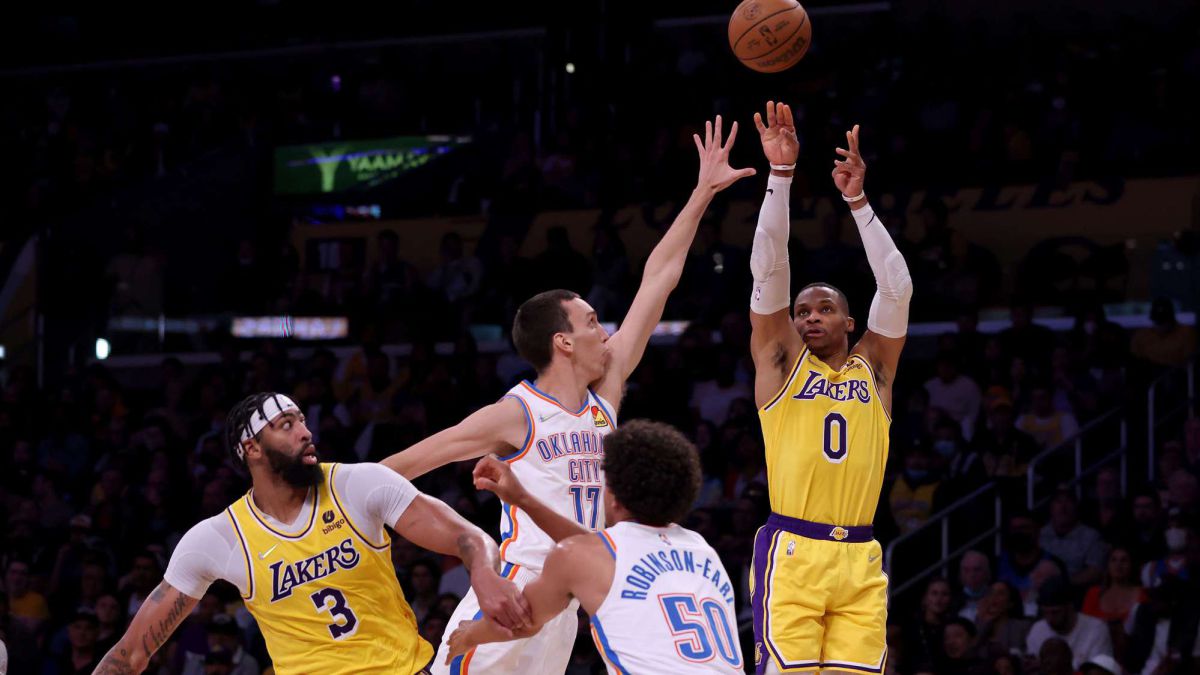 When it was announced in the afternoon that LeBron James would not be playing the Thunder, it was impossible not to think about it, at least for a

When it was announced in the afternoon that LeBron James would not be playing the Thunder, it was impossible not to think about it, at least for a moment: what if…? Eight days earlier, in OKC, the Lakers without LeBron wasted a 26-point lead against one of the worst teams in the NBA, one that had yet to win. Since then, three victories basically thanks to a comfortable schedule … and with LeBron James, whose discharge was announced, due to an abdominal problem, for a minimum of one week. Eye. Because the calendar is going to tighten (now Blazers, Hornets, Heat …) and because LeBron, from ankle to abdomen, has already been absent in three games (out of nine: Pyrrhic 5-4). And a few more are coming. LeBron turns 37 in December and has been in the NBA since he was 18. So far he’s beaten the father time every time they have been insisted on putting them in a ring. Now? We will see, of course. With such a player, who can tell where logic begins or ends.

The point is that the what if…? it happened. Incredible as it may seem. Eight days later, this time at home, the Lakers blew a 19-point lead and lost again against the Thunder., who have won two games this season (2-6). And that they could beat the Warriors 73-9, or so it seems, if this golden and purple ghost were always put before them, hardly a trace of what a good team should be (at least). Something very far from a story that weighs heavily on Staples. And that this group of players is on the way to trample. The sainete had everything, but above all the realization that it is difficult to know where the Lakers are going when LeBron is missing, something that should avoid (at least against the Thunder, at home and after the ridiculous of the previous meeting) having Russell Westbrook and Anthony Davis. And that there is no trace of the defense made in Vogel that made this team champion in 2020 and competitive in 2021 despite a massive accumulation of misfortunes. The attack is not worth anything either, really, but one imagines that with LeBron and the rest that are missing (especially Nunn and Horton-Tucker) that could improve. The defense? It’s hard to see. Alex Caruso, meanwhile, plays for the Chicago Bulls. In case someone does not remember. Does anyone not remember?

Honor to the Thunder, who play patiently and try as hard as they can. Most nights the rival will not be this quince without pride or personality, and they will lose. But they play as far as they can. Rookie Josh Giddey is going to be very good (if he isn’t already), Lu Dort would fit like glue on any title contender, Bazley has obvious potential (and uncorking we’ll see) and Shai Gilgeous-Alexander is an enchanting talent, a star who plays differently from almost all current stars. After a discreet first half, he added 20 points and 6 assists in the second (28 + 6 total), scored or assisted in 20 of the last 26 points of his team and left the image of the night (at least the positive ones) : a triple from the logo to leave in the UCI a rival (95-101) who still squeezed, as in OKC, to allow himself one last ridiculous one. Russell Westbrook missed the triple to tie, the fourth the Lakers sent into limbo to force overtime in two games against the Thunder (three at Oklahoma, one this time). From pure depressing, it ends up being funny.

Beyond that triple, the umpteenth confirmation that he is a player with an angel, Gilgeous-Alexander did literally what he wanted in the fourth quarter. The Lakers defense had no answers for their penetrations. But it is also that, and again like eight days ago, the Thunder saved the minutes without him to open the last quarter. And surely that was the key to his sweet victory, beyond SGA was the best (again) on a track that Westbrook and Davis were on. Good for him, good for the Thunder. The pity for them is that on many other nights there will be a rival with desire to win in front. With systems, with style, with ideas, with defined roles, with stars willing to make things happen. With competitive urgency. The Lakers don’t have any of that right now. And whoever wants to risk something that they will have when the time comes, do so. I am going to skip this bet, if I may.

The Lakers started 8-0 but were 25-21 late in the first quarter. They were 44-25 midway through the second and took 23 points from there to halftime (52-48). They raced after, always for nothing (60-52, 80-72 at the end of the third quarter). Without continuity, without stability, without forcefulness. Patience was enough for the Thunder, play dead and get your head out of the water just in time. His first lead came with 5:27 left (84-85). In the middle of a horrible, embarrassing, indecent stretch of some Lakers who, nevertheless, were 84-75 at 9:42 am from the end. He followed a 0-13 (84-87) in about five minutes of fright, disaster and, there is no choice but to take it like that, comedy. Then they squeezed. The triples that had left before entered but, like eight days before, there were no saving actions. Basketball gods sometimes, and luckily, are fair. The one who had to win won. The only one who, with all his miseries, deserved it.

Carmelo Anthony scored 21 points and 5 triples (5/10). He almost re-enlisted the team with two in a row at the end, just as he missed two lonely before, when the hecatomb could have been avoided. Anthony Davis, who hurt himself for a change (this time in one hand) was omnipresent in the first quarter (18 + 12 in the first half, 29 + 18 + 5 assists at the end) and barely visible in attack in the decisive moments. AND Russell Westbrook spoiled his night, decent at first, with a grotesque, ridiculous ending. Not only did he miss the final triple, a shot that he would not even have to play on a team with logical orders (or the courage to give them); is that it appeared in all the previous photos. At 101-103, and in the final seconds, he ran in transition after Dort’s failure and the ball slipped from his hands. The tie, to limbo. Later, he lost his way on defense and made a simple dunk from Dort himself (101-105). The Lakers were neither capable nor necessary, the height of dysfunction. Westbrook finished with 27 points, 6 rebounds and 5 assists. Right … until it was time to be differential. It was not bad of three (3/6) and did not lose many balls (4), but missed the triple and added the losses that sealed the defeat. And of course, He did nothing so that, when he played, his presence made a difference against a team that would have to be infinitely inferior. But against which the Lakers are 0-2. It’s an embarrassment. No LeBron … but no excuses. The course, if not remedied by solutions that right now it seems impossible to believe, will be long in LA Let everyone (LeBron, Davis, Vogel, Pelinka…) think what they want. It gives the feeling that the same thing is going to give.

NBA: The NBA stokes the fire of controversy with the anti-vaccines: they will not be able to eat or change with their teammates
Minnesota Timberwolves – Denver Nuggets, live
Washington Wizards – Memphis Grizzlies, live
NBA 782

Loading...
Newer Post
Chiellini supports Superliga and calls for football reforms
Older Post
Sport Weekend brand: Casillas, at the sport expo: football and life according to the man who lifted the World Cup