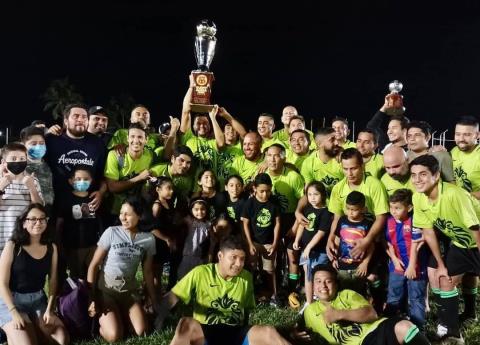 There was no more, last weekend the Municipal Soccer League of Coatzacoalcos, gave the final bolt, with the determination of the winners of the 202

There was no more, last weekend the Municipal Soccer League of Coatzacoalcos, gave the final bolt, with the determination of the winners of the 2022 tournament, within its 76 season in its three divisions; Topography Yescas Canticas, FC lions and Deportivo Oliva, in First, Second and Third Amateur Force, respectively, became the champions.

It was a weekend at the “Rafael Hernández Ochoa” stadium, full of activities, but interesting because the oldest organization in the southern zone of Veracruz, founded in 1946, has apparently begun to revive its most exciting moments than before the Covid-19 pandemic and other causes, used to be seen in the conjugation of sensational games and hubbub of each of the followers.

And so they celebrated on the one hand the Deportivo Topografía Yescas Cantigas, who with a score of just 1-0, but that was very hard fought, beat Restos del Mundo, in the First Force.

while FC lionswhich after the three-goal draw in regulation time, beat Deportivo PMV (Mexican Petrochemical Vinyl) on penalties 4-1 (global 7-4), in the Second Force.

And what about the Tercera Fuerza, where the party was put on by the Amigos del Chelsea (Ixhuatlán del Sureste) and Deportivo Oliva clubs, because they played happy football and in the end, Oliva became the winner of the contest.

At the end of the actions, the directive of the Municipal Soccer League, headed by José Ribón Zárate, in a simple but significant ceremony with the presence of invited friends, was in charge of awarding the winners.

Finally there it was announced that the new season begins on August 26.

Bundesliga: Stuttgart on the verge of knockout | Bundesliga – German soccer on DW. | D.W.
Goal disallowed against Juventus increases controversy over VAR in Italian football
Ryan Brierley does business off the pitch as a women’s soccer agent, now to star.
FOOTBALL 3662

Loading...
Newer Post
Karla Riley, will reinforce the forward of The Machine
Older Post
Brutal the fans: on August 20 there has already been a better entrance than in all of last season