The Navarrese Asier Aguirre, winner of the Bizkaia PGAe Open 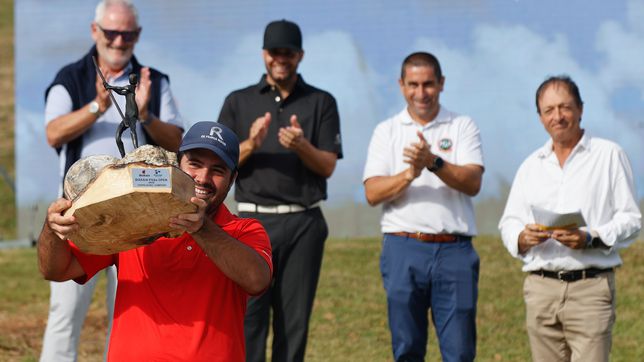 The Navarrese Asier Aguire has been the winner of the “Bizkaia PGAe Open” golf course in a fast-paced final with five tiebreakers that has decided the champion of this professional golf tournament played on the Meaztegi public course and organized by PGAe and the Provincial Council of Biscay. The tournament, the most important of those to be held in the Basque Country in 2022, was the sixth scoring for the PGA Spain circuit and was attended by 122 professional golfers.

After the competition, the organizers have confirmed that the success of this first edition guarantees the continuity of the tournament in 2023. Asier Aguirre has achieved his first professional victory and has shown that he has the nerves of steel to achieve birdies on the last two holes of the course and save two compromised situations in the final five qualifiers. Three players -Asier Aguirre, Gerard Piris and Antonio Hortal- have tied at -13 in the computation of the three days of the tournament, so they have had to tie the tie. Gerard Piris was eliminated in the first tiebreaker.

Subsequently, Aguirre and Hortal have starred in four exciting head-to-head eliminatory rounds on the 18th hole. After four draws, the final victory fell on the side of the young player from Pamplona, ​​with a birdie on the last hole. The first ranked Basque was Borja Martín, from San Sebastian, a disciple of José María Olazabal, who finished sixth, three strokes behind the winners.

In the amateur category, the winner was Pablo Pérez Gracia, who finished in the fourteenth final position. Parallel to the professional tournament, a Pro-Am tournament was held this week in which amateur golfers had the opportunity to compete with professional players. The victory went to the team made up of the professional Borja Martín and the amateurs Jacobo Arístegui, Pablo Guzmán, Guillermo Pérez and Aitor Picaza.

At the awards ceremony there was a special memory for three people who died this year: Carlos Celles, one of the pioneers of golf in Spain, based in Bizkaia since 1960 and one of the founders of the PGA; Ramón de Bastida, international referee; and Ramón Barrenechea, President of the Biscayan Golf Federation, A video has been shown with some emotional words by Jon Rahm dedicated to these three promoters of golf in Biscay. So that nothing is missing, one of the professional players, Carlos Balmaseda, has proposed to his girlfriend as soon as he finished his round today on the 18th hole.

The “Bizkaia PGAe Open” has a prize pool of 90,000 euros plus a bonus of 3,000 euros for the women’s and senior categories. One of the objectives of the “Bizkaia PGAe Open” is to bring golf closer to the population of Bizkaia, taking advantage of the existence of a publicly owned course like Meaztegi. This tournament has had a solidarity character with the active presence during the competition of “DalecadELA”, a non-profit association whose purpose is to make ALS visible, raise funds for research in the fight against this disease and support those who suffer from it. This association was founded by former golf player Jaime Lafita. Another incentive for those who have come to witness the tournament has been the celebration of the Enkarterri Gastronomikoa, with the presence of three gastronomic spaces with Enkarterri-Meatzalea specialties and a large Enkartur stand, an association for the promotion of tourism in the region of the incarnations,

Magic Box. Transparency is the key to this pure white house at the Pacheco Golf Club
The 2022 Children’s Day Golf Tournament returns
The White List prevailed in the Golf neighborhood elections
GOLF 1497