The new era begins: “Without F football is not written the same” 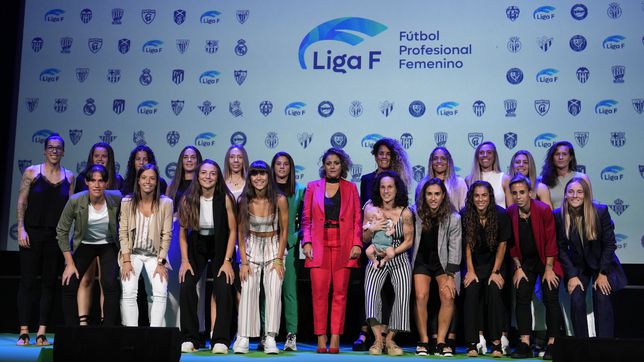 “We have achieved all the strategic points that we proposed and this starts with all the guarantees. A new era begins”, affirmed with a happy face

“We have achieved all the strategic points that we proposed and this starts with all the guarantees. A new era begins”, affirmed with a happy face a Beatriz Álvarez Mesa, president of the new Professional Women’s Soccer League, on the stage of Callao City Lights in Madrid this Tuesday, in a presentation ceremony in which she monopolized all the spotlights at be his first public appearance as visible head of the entity.

“League F, because without F football is not spelled the same”, was the slogan chosen by the new League for its debut in one act, presented by Noemí de Miguel and accompanied by Danae Boronat in the interviews, attended by different personalities from the world of football and sport in general.

Soccer player, coach and president of Oviedo Moderno, promoter of her soccer school, General Director of Sports in Asturias and now top leader of the LPFF. Álvarez Mesa reviewed her life, linked to sports, on stage after highlighting that she had dreamed her whole life of the moment in which the highest women’s category would be professional.

“I have dreamed of it for 30 years and the first thing that comes to mind are people and words, words that they instilled in me: one is humility and the other loyalty”, explained the president, who was very proud of having achieved all the strategic points that had been raised at the beginning of this long-distance race: organization, brand creation, investment and visibility with the broadcast of all the matches (DAZN).

Javier Tebas, Álvarez Mesa’s male counterpart, was also present. “We are here to support, to be there when they need it, to advise if necessary and to push for it to be a success,” assured the top manager of LaLiga, with which the women’s entity recently reached an important commercial agreement.

In addition, representatives of the different clubs and a good handful of footballers from the Women’s League were present at the event, such as Maitane, Van Dongen or Menayo, from Atlético; Marta Carro, from Valencia; María Alharilla, accompanied by her baby, from Levante; Ainoa Campo or the coach Sara Monforte, from Villarreal; Nahikari, from Real Madrid; Nerea Eizagirre, from the Royal Society…

Finally, it is worth noting the attendance of historical Spanish athletes such as Amaya Valdemoro or Almudena Cid and also politicians who have had their weight in the process of professionalizing the Women’s Soccer League, such as Irene Lozano, former president of the Higher Sports Council, or Albert Solé, currently in the aforementioned position.

the clubs that don’t play for (almost) nothing
Soccer: Ferran Torres, City and LaLiga
The Mafia Game III: Those in Black
FOOTBALL 3689