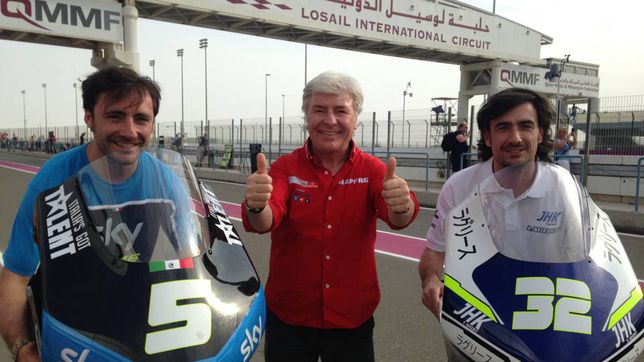 The arrival of Pablo Nieto at Silverstone, to captain the Valentino Rossi teams in the MotoGP and Moto2 categories, coincided with the fifth annive

The arrival of Pablo Nieto at Silverstone, to captain the Valentino Rossi teams in the MotoGP and Moto2 categories, coincided with the fifth anniversary of the death of his father, Ángel Nieto, which occurred on August 3, 2017 when the caravan world cup was installed in the Brno circuit. As you might imagine, and it is nice to see, the Nieto clan, very well represented by Gelete, Pablo, his children, and Fonsi, his nephew, continues to receive signs of affection in the championship five years after their loss, something that gives them “strength”.

“We are doing what he has done all his life. We have always lived it at home and it is the best we know how to do”, says Pablo, the middle of the Master’s sons, when asked if it is better than a date like last Wednesday, it would be better for him to be with a GP in progress . And then he gratefully appreciated the affection they continue to receive: “There have been many gestures of affection that help you realize again the person he was and how much people loved him, and how much they admired him. That makes you even more proud. You realize the father you had and all that he came to achieve. The memory of him remains unchanged. I am very clear about when the day he left us was, but I see that people also know that it was August 3 and that five years have passed. It is something impressive and that makes you pull forward and gain strength. It is sad to know that he is not here and that he will not be here anymore, but he has left an incredible legacy and an indelible mark on the whole world. That makes me happy”.

Regarding the day to day without the physical presence of 12+1, he says: “You miss him in the same way, but in the end you have no choice but to get used to it. I still remember my father every day and I keep asking him for advice when I have something at work or on a personal level. And it will be like that until I leave too.” Eternal Angel Grandson.

MotoGP : Repsol Honda is the moral winner of Qatar
Going from anger to world champion in Moto GP: the Quartararo case
Teams and riders that compete in MotoGP
MOTOGP 703