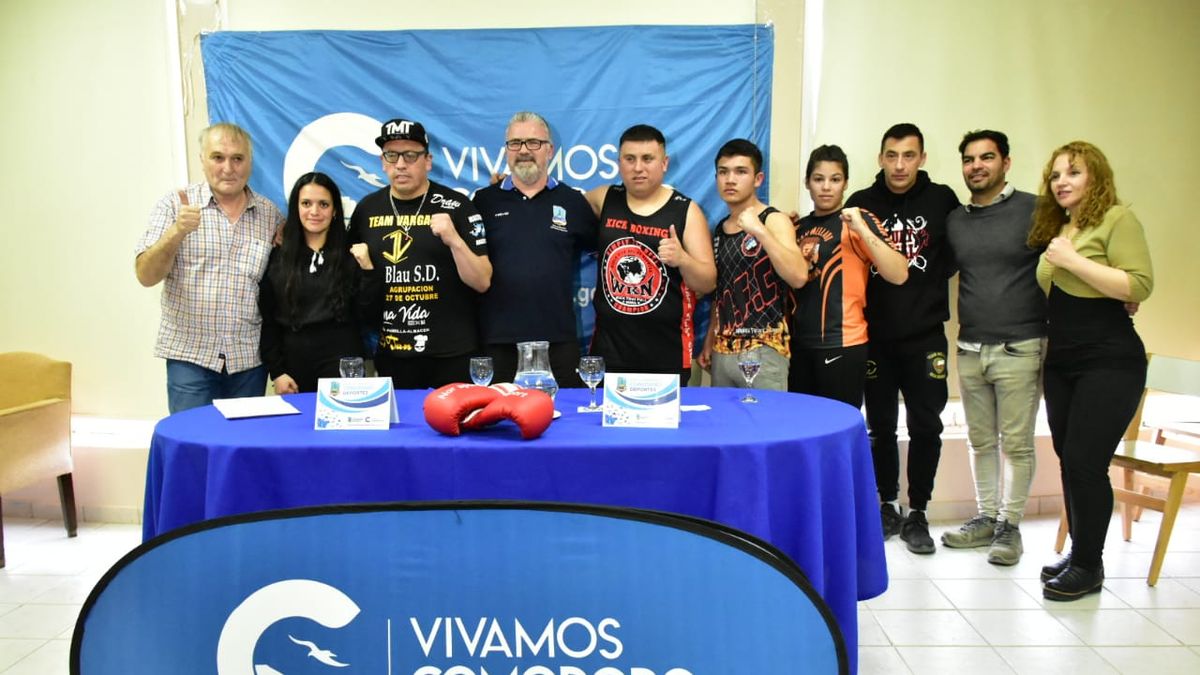 With the organization of Piñas del Sur Producciones and Lago Box, on Friday, September 16, the “Nueva Sangre” Boxing Festival will be held in the

With the organization of Piñas del Sur Producciones and Lago Box, on Friday, September 16, the “Nueva Sangre” Boxing Festival will be held in the municipal gymnasium No. 1. The evening, which has the support of the Comodoro Deportes Autarchic Entity, will begin at 9:00 p.m. and the ticket prices will be: 800 pesos for the general ticket and 1,000 pesos for ring side.

During the afternoon of this Tuesday, the president of Comodoro Deportes, Hernán Martínez, led the presentation. The head of the sports portfolio was accompanied by promoters Vicente Arisnabarreta and Carlos Lago; boxers Florencia Lemos and Mariana Navarro; and coaches Alejandro Mellado and Julio Vargas.

Navarro, who is boxing again against Erica Vera, was “very happy to fight again, I have been inactive for 8 years and I am going to return to my category. I am very well prepared and I have high expectations.”

Likewise, Lemos, who will face Nerina Matthysse in the background, commented that “I trained a lot for this fight, I feel prepared and I am going to give my best. More than anything I want to thank my teacher for always giving me the opportunity. I am happy and very anxious to get into the ring.”

For his part, Arisnabarreta thanked “firstly Hernán Martínez, who through the Ente Comodoro Deportes is always helping.” And he extended his thanks to Carlos Lago, Team Mellado and Team Muñoz, and to the teachers of the boxing schools.

“It will be a nice event, with a good background fight, very competitive and close, between Nerina Matthysse and Florencia Lemos, who besides boxing does kick boxing, so she is very well prepared. We hope that the people will accompany”, concluded the promoter.

Finally, Hernán Martínez said that “boxing is once again on the screen of sports activity, because it has been developing continuously and in an orderly manner. Today two promoters start working together to promote sports activity and, those of us who have to accompany them, that makes our work easier”.

“In this festival, women are going to be protagonists again, they will be the central part of all this, with Mariana Navarro, led by Julio Vargas, and Florencia Lemos, with Ale Mellado. Boxing is taking on that leading role that we need, last weekend we spontaneously hosted the Provincial Tournament, and Commodore put on what he had to put on”, he added.

“It is also true that there is a decision of the municipal State, hand in hand with our mayor Juan Pablo Luque, to accompany them, to provide them with everything that is needed and allow an event to be of hierarchy,” Martínez said.

On Saturday, starting at 3:00 p.m., Team Mellado organizes an intensive boxing clinic led by Mr. Iván Díaz Pequeno. The Cuban, who is the coach of Nerina Matthysse, worked at Valle del Chubut and will continue his career at River Plate.

Alejandro Mellado (Team Mellado) invited all the boxing schools in the city to join: “The idea is that we work together, bring new things that serve us all, coaches and students.”

Offers exhibition Jorge El Travieso Arce
Boxing: Terence Crawford, against the most difficult opponent of his career
What happened to Muhammad Ali? At what age did he die, what…
BOXING 4156

Loading...
Newer Post
Kevin Yael wanted to be a boxer; he was dedicated to training and studying
Older Post
He is a boxer and became violent with his brother and with the family of his ex-partner | NewsNet