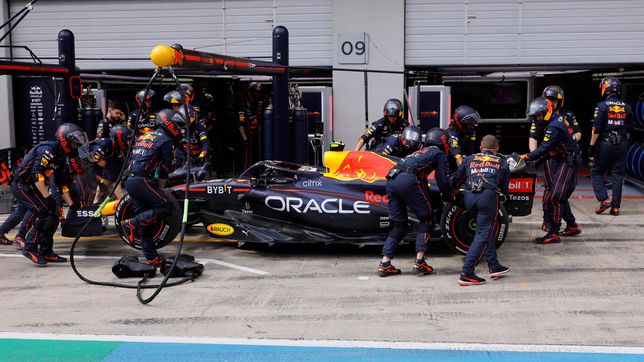 The work of the mechanics in Formula 1 can be assimilated to that of the goalkeepers in football. If they do their job well, nobody talks about th

The work of the mechanics in Formula 1 can be assimilated to that of the goalkeepers in football. If they do their job well, nobody talks about them, but if they fail, they are the center of all criticism. The role of the people who meet in the garages has increasingly become a crucial role for the future of the race. In this 2022, there have been times when a driver has won a grand prix thanks, in large part, to his pit crew. Other times, they have lost them for the same reason.

In this 2022 there have been a total of 418 ‘pit stops’. To check who is the fastest team in this facet, all the stops that involved changing parts, such as the front wing, have been eliminated. The fastest came in the final race in Hungary, when Red Bull mechanics changed tires on ‘Checo’ Pérez in just 2.19 seconds. The mechanics of the Austrian team are the clear dominators in this field: the average of their stops is 2.91 seconds, being the only team that falls below three seconds. 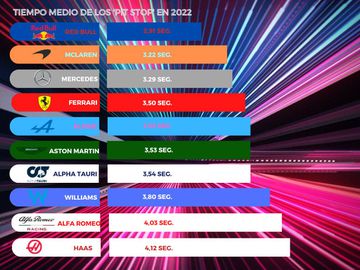 Not only does Red Bull dominate as a team, but Max Verstappen is the driver with the fastest stops on the entire grid, averaging 2.78 seconds each time he changes tyres. His partner’s average is 3.05 seconds.

The second fastest pit stop is McLaren, with an average of 3.4 seconds per stop, half a second behind their Red Bull teammates (nine of the ten fastest pit stops of the entire season have been made by those of Woking or by the Austrian team).

Daniel Ricciardo may be having a difficult season, but his stops are the second fastest (3.04 seconds on average). His teammate Lando Norris would also have a good data in this aspect if it were not for that tire change in Canada (19.68 seconds, the slowest of the whole year), in which his team did not have the tires prepared when the British entered the ‘pits’.

The other stop missing from the top 10 was made by the Ferrari team in Spain (2.23 seconds with Charles Leclerc). The ‘pit stops’ of the Italian team last an average of 3.50 seconds, being the fourth fastest team. Of course, the difference between teammates is notable: Charles Leclerc’s saves have an average of 3.33 seconds, while Carlos Sainz’s last 3.67 seconds.

The greatest distance between teammates is between the Alpine drivers (3.53 seconds on average): while Fernando Alonso’s stops have an average duration of 3.32 seconds, Esteban Ocon’s ‘pit stops’ are 3 .73. From the bottom, the least efficient teams on the pit lane are Alfa Romeo, with an average duration of 4.03 seconds per stop (Guanyu Zhou has the worst average of the entire grid with 4.20 seconds) and Haas, last with 4.12 seconds. Carlos Sainz’s stops at the French GP deprived the Madrid native of the podium.Eric Gaillard

Carlos Sainz in France, the worst average in a race

Carlos Sainz had a difficult race at Paul Ricard due to his component change penalty. The man from Madrid managed to climb up to the top positions, and had the possibility of getting on the podium… until he entered the pits. The Ferrari driver came in twice to change tires and each time was a real nightmare for 55 (who had a five-second penalty for an ‘unsafe release’ at the first stop). The Italian team’s mechanics made ‘pit stops’ of 8.38 and 9.38 seconds, which makes the Maranello team have the worst average of the year in a grand prix (8.88 seconds average in the French GP) .