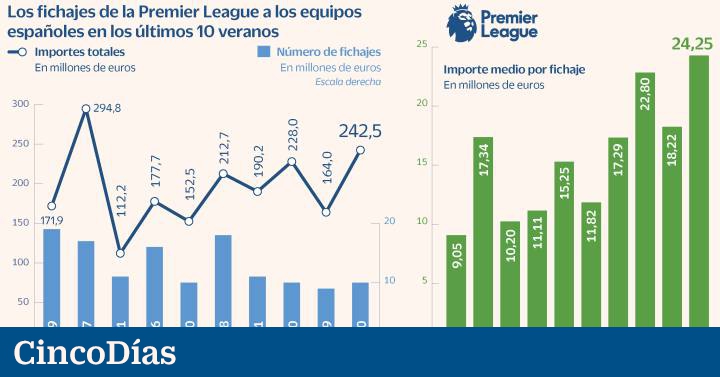 In case there was any doubt, the Premier League teams have decided to demonstrate their financial power in the football transfer market this summe

In case there was any doubt, the Premier League teams have decided to demonstrate their financial power in the football transfer market this summer. The English tournament has already broken its spending record in a summer transfer window, exceeding 1,500 million pounds, according to data collected by Deloitte, and it still has four days to complete the last operations.

Of those already closed, the one that has had the greatest impact in Spain has been the signing of Swedish striker Alexander Isak for Newcastle, who has paid more than 70 million to Real Sociedad for his property. With this transfer, there are already 10 footballers from Spanish teams who have signed for an English team, close to 243 million in all operations, among which the 70 million that Manchester United has paid Real Madrid for Casemiro also stand out.

The Spanish league is the Premier’s favorite fishing ground this summer, at least in terms of the amount transferred. In addition, those 243 million represent the largest amount that Spanish teams have received for the sale of their footballers to the Premier since the summer of 2014.

Something that shows that this is not a new phenomenon. The sale of players to the Premier has become a recurring financing formula for Spanish clubs. According to the data analysed, in the last 10 summers, including the current one, first and second division teams have entered nearly 1,950 million euros in this way, 300 more than the Italians, the following in this particular ranking. That figure gives an average of almost 200 million for each summer transfer window.

What has changed is the profile of the teams that acquire these players. In the summer of 2014, the main operations were carried out by teams such as Manchester United, Arsenal, Chelsea or Liverpool, always located at the top of the table. This summer Manchester United repeats with Casemiro, but the rest of the teams that have paid a transfer to a Spanish team are the aforementioned Newcastle, Wolverhampton, Aston Villa and Brighton.

Teams all of them from the lower half of the classification last season, but which demonstrate the financial capacity of the Premier League and the success of the audiovisual revenue sharing system: these teams have received between 120 and 130 million pounds for that concept alone , figures that in Spain are only within the reach of the two greats.

What has also changed, as a result of the inflationary trend in the market, is the average amount paid for each transfer. Those of this summer reach 24.3, six more than a year ago and the highest figure of the last ten, also taking into account that three of these operations have been with free players or on loan.

All leagues suffer from the power of the Premier. This summer alone, player departures from Germany to England have reported 185 million; 176 million in the case of French football; and 151 million of those from Italy. Together with the data from Spain, 755 million, which still only represents half of what the English teams have spent this season.

More money for transfers… and for salaries

The income generated by the Premier League teams, and which this year will exceed 7,000 million euros for the first time, allows them not only to pay significant transfer figures, often in cash. Also offer footballers salary conditions that are unmatched by any major league. According to Deloitte data, each team in the English top flight allocated an average of 195 million to salaries in the 2020-21 season, almost double the 109 million of the Spanish, or the 108 of the Germans.

In that season, up to four teams exceeded 350 million wages: Manchester City, Manchester United, Liverpool and Chelsea, and only two teams fell below 100.

Tags: year, touch, purchase
49ers-Cowboys, a historic rivalry that fuels the NFL playoffs
Sandra Douglass: who is the president of the NFL, where she was born, age, family
Carlos Tevez’s confusing statement about his present in football: “Since I retired…”
FOOTBALL 3672