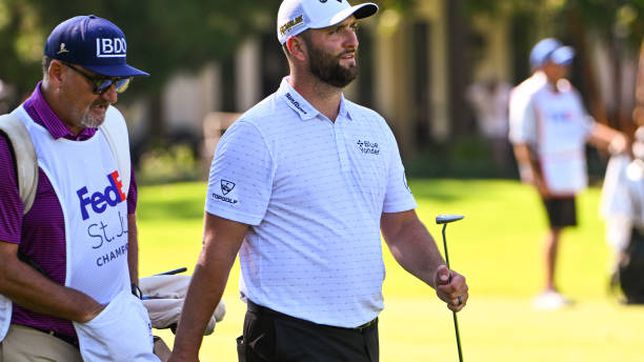 The putter, perhaps the most important club in a golfer's bag today, remains Jon Rahm's main workhorse this season. This Friday he gave him headac

The putter, perhaps the most important club in a golfer’s bag today, remains Jon Rahm’s main workhorse this season. This Friday he gave him headaches again in the second round of the St. Jude Championship, the tournament that kicks off the PGA playoffs, with the 125 most regular players of the season in contention. What could have been a great lap that put him fully in the ointment, in the end he was flat as a Coca-Cola without gas: -1 for -4 in total and provisional 30th place, seven strokes behind the leader, the American JJ Spaun with -11.

Rahmbo signed this time five birdies for four bogeys at the TPC Southwin in Memphis (USA), which once again tolerated low results. The cut is projected at -2 after 36 holes, with only 31 players over par. All the red numbers (in the 10, 14, 17 and ) of the Biscayan, who is doing much better from tee to green than when it comes to finishing off the holes, came with two separate trips, a rare bird so far in the career of a guy who has left real gems in this lot.

“I’m having a hard time getting up to speed,” he acknowledged at the end of his round. “I have missed many opportunities. I’m not taking lines well or hitting well. I’ve put in a couple of good ones and I’m trying to avoid mistakes. The greens are very fast and you have to fight. I’m missing putts that I normally make. I don’t know if it’s the reading or the technique, but if I had scored three or four I’d be up, because I’m hitting the ball well”, she reeled off.

The truth is that the León de Barrika is above average this week in distance from the tee (more than 291 meters) and greens reached (83.33%), but the putter is too great a burden (-0.488 strokes gained with that club, when in the season he marks a 0.202, 62nd on the circuit in that statistic) to get into the leading locomotive, formed on the second day by the aforementioned Spaun and his closest pursuers, his compatriot Merritt and the Austrian Straka ( -10), with Finau (-8), in a state of grace after winning 3M Open and Rocket Mortgage back-to-back last month, looming.

Check here the complete classification of the St. Jude Championship.

GOLF Terramar will put the best European professionals to the test
Los Cabos will have a new golf course, designed by Jack Nicklaus
Rain and hail the size of golf balls falls north of Hermosillo
GOLF 1532

Loading...
Newer Post
Football, the League on the way to Qatar
Older Post
“It was very painful”: the reason that pushed Sebastian Vettel to withdraw from F1