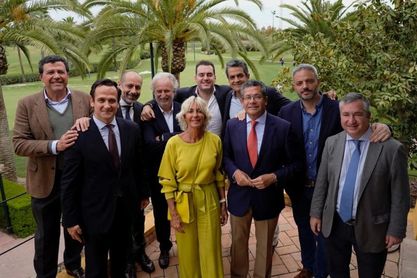 On the occasion of the celebration of his 30th anniversary in this year 2022, the Real Club Sevilla Golf has held a meeting with journalists and communicators from different media in Seville with whom he has shared the trajectory of the sports and social entity throughout this period.

This meeting and lunch with the Sevillian media is part of the extensive program of initiatives planned for this year by the Board of Directors of the Real Club Sevilla, aimed at celebrating these 30 years of life as a sports club and especially a golf clubfocused on outdoor family leisure and where the main asset is its large social mass.

In all these years, without a doubt, golf has been the Club’s star sport as it has one of the considered best courses in Spain. Designed by José María Olazábal, it became the first 18-hole course in the city of Seville. Today it is a national and international reference for the practice of this sport.

During these 30 years of history, various prestigious tournaments have been held at its facilities of the European Tour, including the Challenge Tour in 1993, Seville Open and World Cup in 2004, Spanish Open in 2008 and 2010, Andalusian Open in 2009, and the most recent, another Spanish Open in 2012.

Tags: Real Club Sevilla Golf
La Valmuza Golf organizes the first Pro Am Hankook on April 18
US Open 2022 | Golf: Rahm comes out stronger from the US Open despite falling to third place in the ranking
From the ‘house occupies’ to success at the US Open
GOLF 1026