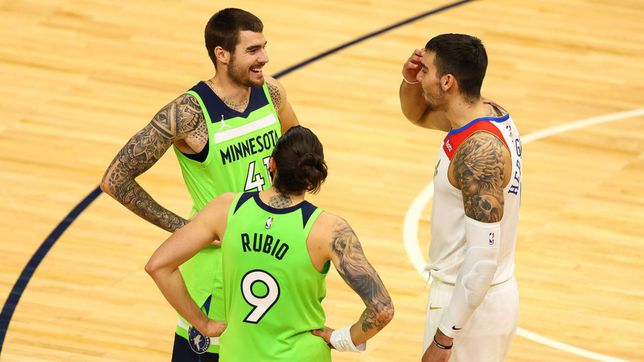 The NBA summer market opens on June 30 and the six Spaniards who played in the 2021-22 season have different objectives and, above all, priorities

The NBA summer market opens on June 30 and the six Spaniards who played in the 2021-22 season have different objectives and, above all, priorities and positions in these coming days. Some are calm with their contracts despite the fact that they can be exchanged in transfers, others must decide their future for themselves. It seeks to keep the number one more year.

Ricky Rubio was having one of his best seasons in the NBA. With stellar nights, the Spanish point guard had put the team on his back. Players and fans admired Ricky’s great work, in fact, LeBron James on his Twitter account came to “compliment” to the former Barça and Joventut.

Unfortunately, the worst part of the game came along, injuries, and Ricky went from team leader to bargaining chip to bring LeVert from the Pacers to the Cavs.

After a few months of uncertainty due to the long recovery of his anterior cruciate ligament, which will not allow him to start the course, it seems that there is light at the end of the tunnel. Those from Ohio would be interested in bringing Ricky back, although nothing is confirmed, but taking into account that he played at a high level with the Cavaliers jersey and that from the franchise environment it is ensured that this is a very real…

The Hernángomez brothers will have a quiet summer. Willy, 28, currently plays for the New Orleans Pelicans. He is playing in Louisiana on a 4-year, $7 million-plus contract that expires in 2024. The final season, 2023-24, is not fully guaranteed, but the next one is. For his part, Juancho, after several comings and goings, it seems that he will not move either. He continues with the contract that he signed until 2023, for a total of 21 million dollars, and in principle he will continue in the Utah Jazz, where he arrived after the transfer from Boston to San Antonio, where he was cut and headed to Salt Lake City . Juancho will earn more than 6.6 million this season and will be released next summer.

The young Spaniard is a project for the future. This season, despite having played several games with the Memphis “B” team, he showed his level in the few minutes he played in the NBA. Aldama fits in with the Grizzlies’ project, so it looks like he won’t budge. He has a four-year contract that expires in 2025.

Garuba’s situation is similar in terms of contract. Also four years that expire in 2025. The one who was a sensation at Real Madrid, he has not had many opportunities at the Rockets, who are trying to rebuild after the departure of James Harden. It’s a project he could fit in if he started to get into rotation.

Ibaka is the great unknown within the Spanish. After his back injury, he returned to play some games with the Clippers. After he was traded to the Bucks, he didn’t get many opportunities either, with less than four minutes per game. At the time he was one of the best defensive players in the league, but now the situation is different. This summer he will be a free agent and there are rumors that he could leave the league. One of the possible destinations could be Virtus de Scariolo, a coach he already knows from the Spanish team. There is nothing confirmed but it could be a way out for the Spanish interior.

Not even Kyrie Irving saves the Nets
The story of Charles Barkley, an uncrowned king in the NBA
Cazoo Baskonia confirms Fontecchio’s departure to the NBA. This is how they communicated
NBA 3235