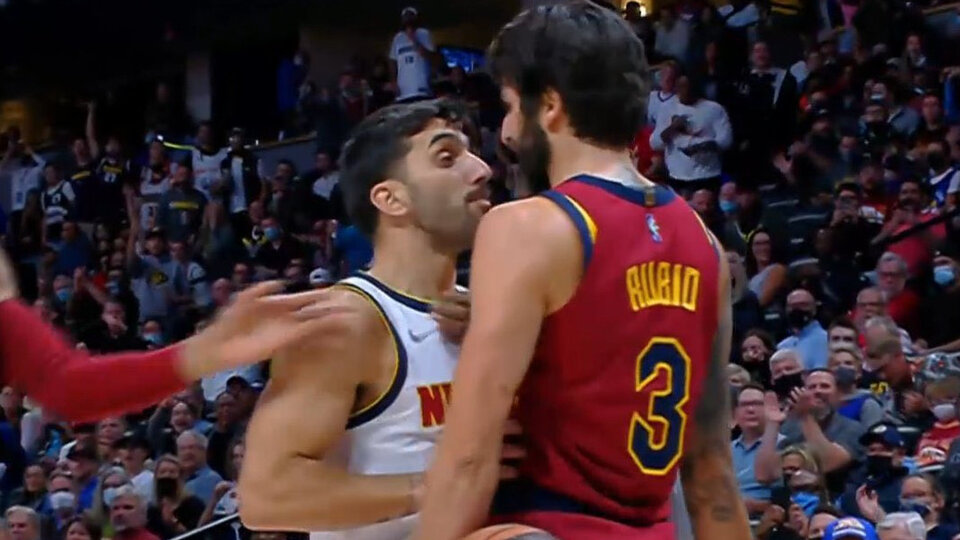 This Monday the Cleveland Cavaliers defeated the Denver Nuggets 87-99 in an irregular game at the Ball Arena. The match was marked by a confrontat

This Monday the Cleveland Cavaliers defeated the Denver Nuggets 87-99 in an irregular game at the Ball Arena. The match was marked by a confrontation between the guards of both teams: the Argentine Facundo Campazzo and the Spanish Ricky Rubio.

In the third quarter, when the Nuggets were within a point of the Cavs, Rubio had the ball in his hands, Campazzo went to mark it and hit the Spaniard’s right knee, which fell to the ground.

When they got up, both bases went face to face while pushing and saying things under their breath and had to be separated by their teammates and part of the technical team. Both Campazzo and Rubio received a technical foul for the episode.

The players had already crossed paths on other occasions wearing the shirts of their national teams in the 2016 Rio Olympic Games, the first round of Tokyo 2020 and the final of the 2019 China World Cup. In all the matches Spain won and Rubio was crowned, also, as World Cup MVP.

In Monday’s game, the performance of both bases was poor. The two entered as substitutes, Rubio added 7 points and 8 assists; Campazzo, 3 and 3, respectively, with 17 minutes and 37 seconds on the court.

Teammates Aaron Gordon and Will Barton followed on points, with 12 each. Campazzo was content with 3 points, 2 rebounds, 3 assists, 1 steal and 1 turnover.

In the Cavs, Kevin Love stood out, with 22 points and 6 rebounds, and Jarret Allen, with a double-double of 21 points, 16 rebounds and 2 assists. Rubio scored 7 points, 4 rebounds, 8 assists, 1 steal, 1 block and 2 turnovers.

Denver came within three points as soon as the last quarter started, but the Cavs were within two minutes of play within 10 points, 72-82.

This Tuesday, the Colorado franchise – which is ranked fourth in the Western Conference – will seek a victory when it visits the Utah Jazz from 11 pm.

Tags: Ricky Rubio, Denver nuggets, Cleveland Cavaliers
LeBron James: A great King of the NBA both young and old
Cavaliers 105-92 Magic | NBA: Ricky Rubio recovers the road to victory for the Cavs with his “pieces of art” in the form of assistance
Wizards 110-93 Cavaliers | NBA: Cavaliers begin to suffer from post-Ricky Rubio syndrome
NBA 2521