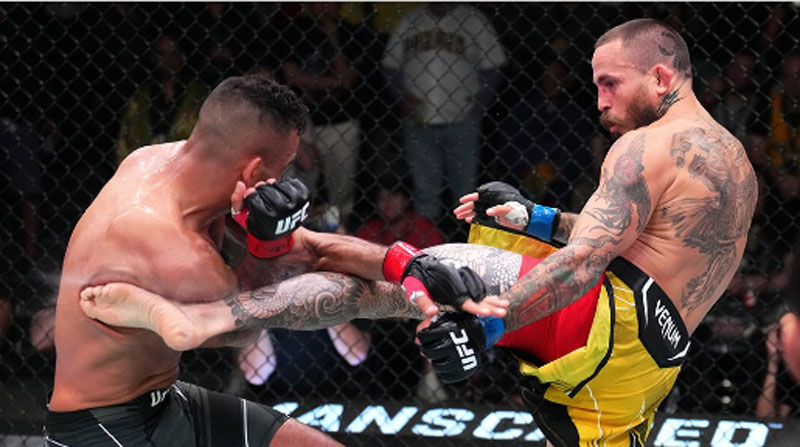 In publications of this August 10, 2022, the UFC calls him the ‘Destrozador’. That qualifier is accompanied by a shocking video of his punches during his last bouts, like in the win against former champion Frankie Edgar whom he defeated with a brutal front kick to get a knockout.

This Saturday, August 13, 2022, the Ecuadorian Marlon Vera will face Dominck Cruz, another legendary former champion in several companies including the UFC.

Marlon ‘Chito’ Vera arrives at this bantamweight fight (135 pounds) ranked number 5 in the world in the UFC.

For his part, Cruz is eighth. The combat promises to be sensational and the Manabi athlete hopes to come out with his arm raised in victory. A win would put him on the brink of a shot at the crown in his weight division.

The fight is key for Marlon ‘Chito’ Vera. In official UFC publications it is mentioned that the winner between Vera and Dominick Cruz “will emerge as a contender for the bantamweight belt.” The Ecuadorian and the American will star in the main event of the UFC San Diego card, on the night of August 13, 2022.

The Ecuadorian comes to this fight with a professional record of 19 wins, 7 losses and a draw. Cruz, a famed former UFC champion, has 24 wins and 3 losses.

Marlon Vera vs. Dominick Cruz on his professional fight record. CRA/ THE COMMERCE

These days the promotion of the fight is at its peak. Even in other videos, published this day, Vera and Cruz are seen crossing paths in the hotel, but without any consequence.

Vera and Cruz will meet on the night of Saturday, August 13, 2022 in San Diego, United States.

Ana Vivar and Esther Galarza improve in the Vuelta a #Colombia Femalehttps://t.co/AEQXoeQOsk