The “undrivable” car that is getting closer to Ferrari 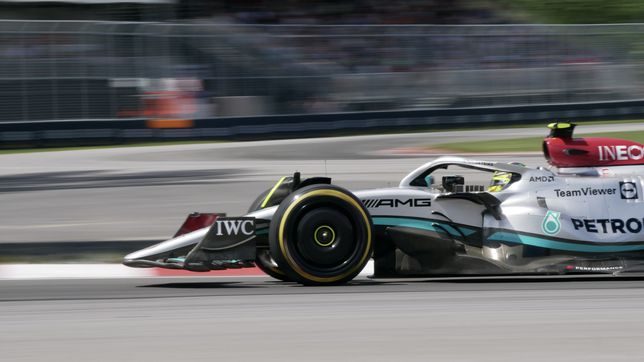 It's funny, hours after talking about a “'undrivable' car and that it's getting worse”, Lewis Hamilton achieved the second podium of the season, th

It’s funny, hours after talking about a “’undrivable’ car and that it’s getting worse”, Lewis Hamilton achieved the second podium of the season, third place in Canada. For various reasons, the story has been fed that the Mercedes W13 is not a great single-seater and suffers from two evils, ‘porpoising’ and the lack of downforce, but they are by far the most reliable team (zero dropouts) and have risen to the ‘drawer’ in five races out of nine. In fact, in the constructors’ standings, Ferrari (2nd, 228 points) is closer to Mercedes (3rd, 40 points higher) than Red Bull (1st, 76 points higher). Not bad for an ‘undrivable’ car. If the factory were able to unleash more performance with successful improvements, it is plausible to imagine Hamilton and Russell fighting for victories in the second part of the season.

Part of Sir Lewis’s complaints on Fridays, after practice, are usually the result of a testing program that has led him to assemble parts of little use to the characteristics of the Mercedes. “Perhaps George could do the experiments in the second half of the year. We’re trying to make progress, but I think we’ll be a little more cautious about experimenting with things that affect the weekend. Now we come to Silverstone, an important race for the team and for me, and I hope I can fight with these guys”, he said in reference to Verstappen and Sainz, Red Bull and Ferrari. The seven-time champion has won a race in all his F1 seasons, from 2007 to 2021. This year it will be a challenge to revalidate the statistic.

Along the way, Brackley must assess whether to take a step back from the concept of aggressive pontoons, or non-existent, or persevere along that path. “You can’t look at W14 until we understand what needs to be changed in W13. We have to see the next races, practice by practice. We lack rhythm, regardless of the rebound. Realistically, we are not going to win this World Cup by much margin, maybe we should consolidate the third at the moment and see what we can learn”, admits Toto Wolff, the team boss.

This weekend the seven-time champion returns home. To the scene of the crime, a year ago the best fight between Verstappen and Hamilton ended suddenly in Copse with a violent accident by Max at 230 kilometers per hour. The Dutchman, world champion, arrives at the British GP with an advantage of 36 points over the second, his teammate Pérez; which is 39 with respect to the first true enemy, Leclerc. Meanwhile, Hamilton is sixth in the World Championship, his worst classification since F1 is hybrid. This is the Great Circus, the difference between seventh heaven and the middle zone is dictated by the capabilities of your car.

Mechanic betrays Mercedes and Hamilton to make the Mexican Formula 1 champion
McLaren stars in the most ‘wild’ party in Formula 1: “We destroyed the hotel floor”
Schedule and where to see the classification of the Hungarian GP of Formula 1 on TV
FORMULA 1 1962

Loading...
Newer Post
NBA: Historic Sue Bird: no one has won more games than her in the WNBA
Older Post
The NBA stirs the hornet’s nest with a 10% increase in the salary limit