The unicorn Chet Holmgren, the player never seen in the NBA 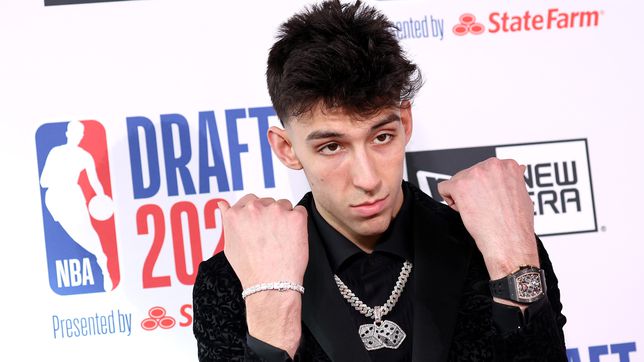 Chet Holmgren can't buy certain Nike models because they don't fit his foot. He struggles to find a comfortable plane seat and has so far played i

Chet Holmgren can’t buy certain Nike models because they don’t fit his foot. He struggles to find a comfortable plane seat and has so far played in number 34, also in his only year at Gonzaga University, because at the time it was the only shirt that fit him at Minnehaha Academy, a prestigious private center in Minnesota where he studied and became a basketball player alongside Jalen Suggs, his close friend, partner there and on the amateur circuit (AAU)… and also a Gonzaga player. Suggs, a combo guard of 1.96, played for the Bulldogs in the 2020-21 season and was chosen with the number 5 draft by Orlando Magic, where he experienced a difficult rookie transit through the NBA last year. Following in his footsteps, Holmgren went to Gonzaga (2021-22) and has been elected number 2 in the NBA. He will play for the Oklahoma City Thunder. Number 1 (invested in Paolo Banchero) was held, precisely, by Suggs’ Magic (“we knew we were going to be good, but we didn’t know how good,” he says). The dream of playing together again was one step away.

Holmgren was a serious contender for number 1 because, of course, his abilities draw an unlimited ceiling. He is one of those unicorns that current basketball generates, a game of liquid positions and versatility like a philosopher’s stone. What to do with a 20-year-old player, 2.13 tall, 2.31 wingspan and base movements with the ball in his hands? Literally whatever you want. But: what to do with a boy of only 88 kilos, arms and legs like pins and a body of complex transfer to professional basketball? That was the debate: Holmgren is so good that he wasn’t going to drop too far in the draft. But someone (it was the Thunder, in 2) had to dare and patiently project his physical evolution. Paolo Banchero and Jabari Smith Jr (numbers 1 and 3, finally) seemed to have a firmer ground, higher. But Holmgren’s roof… the possibilities are endless, the risk high. Must play.

The famous crossover to Stephen Curry

Gamble, gamble: Holmgren always has. His father trained with the University of Minnesota, where knee injuries prevented him from breaking through. When he saw that his son was 1.88 meters tall at eleven years old, he wanted to give him a good training in basketball. But he chose to be a father, not a coach. He taught fundamentals at home but left the hard work to Brian Sandifer, famous in the Minneapolis area for polishing young players who were still very green. With Sandifer, Holmgren acknowledged that he cried after many training sessions (“but I always come back, I take on the challenges”). His coach made him work with guards and shooting guards, including his since then (and until College) inseparable Suggs. That’s how he learned to defend outside, to attack by dribbling and moving all over the track.

His beginnings as a player were spent on the bench and, for hours and hours, practicing his shot and his dribbling. In his freshman year of high school he averaged 6.2 points and 3 rebounds. Before the second, he only had two college scholarships in the mailbox. He went up to 18.6 points and 11 rebounds. In his last year he was already a national sensation: 21 points and 12.3 rebounds on average. Thirty universities behind him and a couple of viral feats: in Stephen Curry’s SC30 camp he responded to a ten-meter triple that the Warriors point guard nailed him with a crossover (ball under the legs, behind the back…) against one of the best players in history. “You got me on that one,” Curry told him. That week, his Instagram account received more than half a million views. In his high school’s national television game against Sierra Canyon (LeBron James’s team in which Bronny, LeBron James’ son, played) he had 9 points, 10 rebounds and 12 blocks.

He chose Gonzaba, like Suggs. He averaged 14.1 points, 9.9 rebounds and 3.7 blocks. His team was first in the AP rankings, won the West Coast Conference and entered March Madness as the top seed and heavy favorite. But a year after the historic disappointment of the Suggs team (a season without losses spoiled in the final, against Baylor), there was no rematch: the toughness of Arkansas was stronger in the Sweet 16 (68-74). Holmgren had 11 points and 14 rebounds after debuting in the first round with 19+17, 5 assists and 7 blocks. Bad taste in the mouth… but inevitable NBA destiny.

The Thunder take a unique player. The risk is that his physique can’t keep up with the NBA rhythm, or that trying to transform him and put muscle and weight on him will rob him of his innate agility, his speed of movement. He jokes and reminds all fans of two key issues: “Yes, I eat. And yes, I do weights in the gym.” The rest, the talent and the size, are there. He bounces, passes, shoots, creates, dribbles, scores and defends wonderfully, with a great intimidating capacity that is influenced by his endless arms but also by his sense of timing. Holmgren is one of the star projects with the highest ceiling but also the most pronounced risk in recent years. Thinking about his future makes you dizzy. That’s why he hasn’t been No. 1…and that’s why he hasn’t dropped below No. 2. His time has come, and the OKC Thunder’s.

The pick in the Sacramento Kings NBA Draft 2022: Keegan Murray
NBA: Trophies with the names of Magic and Bird for the MVP of the Conference Finals
Miami Heat – Atlanta Hawks, live
NBA 3184