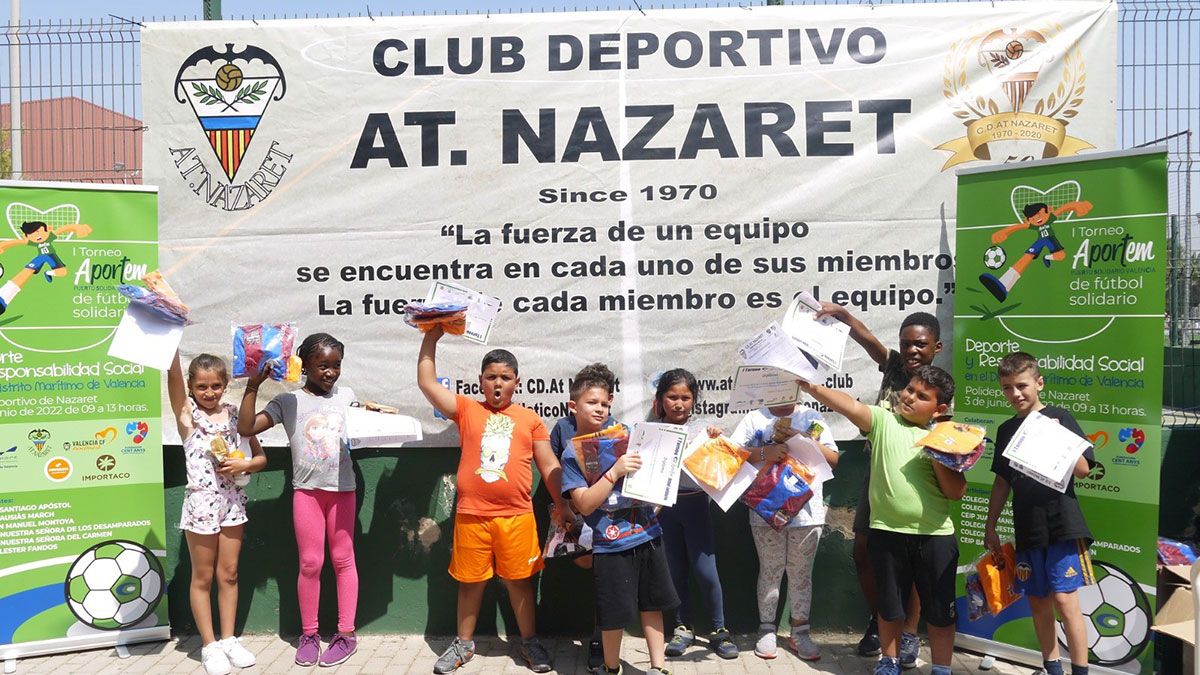 The First Aportem Solidarity Football Tournament culminated in a festive day of sports and solidarity for the little ones in the Maritime District of Valencia. More than 400 boys and girls from different schools gathered in an initiative promoted by the Valencian port community, through Aportem – Puerto Solidario Valencia.

The day of Aportem and Club Atlético Nazaret, had the altruistic collaboration of the Port Authority of Valencia (PAV), the Valencia CF Foundation, the Cent Anys Foundation of Levante Unión Deportiva, Consum, Importaco and Novaterra Catering.

A total of six schools participated: Santiago Apostol, Ausìas March, Juan Manuel Montoya, Nuestra Señora de los Desamparados, Nuestra Señora del Carmen and Ballester Fandos, all of them located in Nazareth and in the Maritime District of Valencia. The directors and teachers of these centers played a prominent role in the success of the complex initiative.

Three buses set up by the Organization picked up the boys and girls between the ages of 6 and 12, to take them to the Nazareth Sports Center, where the massive event took place. The minors had lunch and various gifts, including a Valencia CF shirt and another Levante UD shirt for each participant.

After the success of this edition, Aportem wants to reinforce and give continuity to the initiative with different actions that add more incentive for the second edition, such as performances by clowns or magicians, to round off this festival of solidarity and sport.

Carlo Ancelotti does not rule out retiring from football once he leaves Real Madrid | THE UNIVERSAL
the networks talk about the World Cup preview
Live transfer market: last hour of the market closing and reactions
FOOTBALL 2715

Loading...
Newer Post
Jake Paul Says Floyd Mayweather Is Already Bankrupt
Older Post
NBA Finals 2022: The court factor does not go with the Warriors: the streak that is history in the NBA