The Valencian Women’s Golf Team, silver in the Spanish Championship 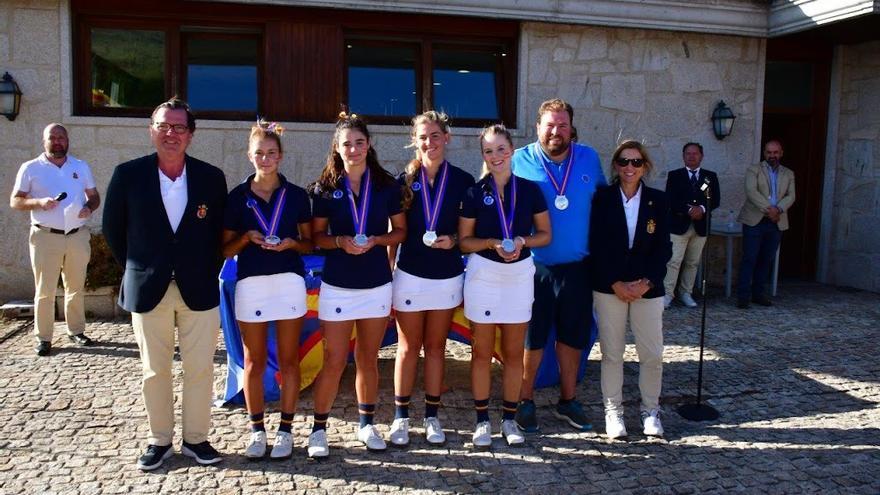 The Valencian Women’s Golf Team won the silver medal in the first Spanish Armed Forces Under 16 Championship that was held at the Balneario de Mondariz golf course in Pontevedra. The team made up of Rocío Tejedo, Balma Dávalos, Cloe Amion and Martina Navarro, captained by Alberto Ballesterlost in the final against the Catalonia team by 3.5-1.5, but left a good taste in the mouth and confirmed that the future of Valencian golf is more than assured.

The competition held by the Valencian Community Golf Federation team, in which seventeen regional teams participated, was truly spectacular. With this silver medal they are already 9 consecutive getting metal. The FGCV team shone from day one of the competition and was confirmed as one of the great favorites for the final victory each day that passed. Thus, after beating Madrid in the semifinals, Valencia faced Catalonia in the grand final of the tournament. The lack of luck in foursome (2-0) tipped the balance. The so-called consolation final saw Madrid triumph over Andalusia by 3-2.

The Valencian National Team, like Catalonia, was intractable from the quarterfinals. The Valencian team was superior to all its rivals and earned its place among the top four by defeating the Navarra team by a clear 4-1. Those of the FGCV channeled their confrontation in the matches of foursome, with two victories by the pairs Balma Dávalos and Martina Navarro, and Rocío Tejedo and Cloe Amión. Then, in the individual matches, Lucía Arrieta got the only point for the Navarrans, since Cloe Amión and Rocío Tejedo settled their respective commitments with victories.

Regarding the semifinals, the duel between Valencia and Madrid opted for our side for a clear 4-1. Balma Dávalos and Martina Navarro, and Rocío Tejedo and Chloe Amión led the way, signing up for both matches foursomeand then, in the individual, Balma Davalos won again, while Rocío Tejedo and Cloe Amión concluded their matches with two draws. The other finalist team was Catalonia, after defeating Andalusia in a match more even than expected (3-2), and as we have said before, they were more successful to win the gold.