The Warriors, against the Celtics fans: “Are they not human?” 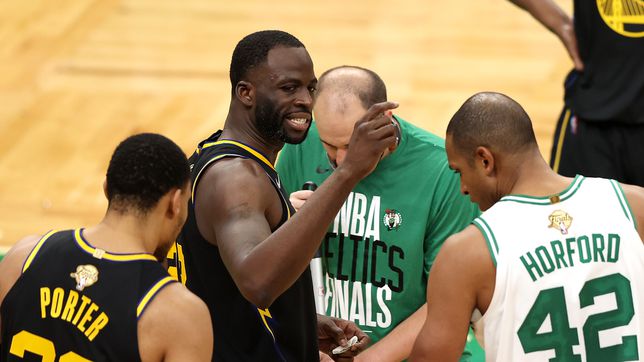 The Finals are not being easy at all for Draymond Green. The power forward (32 years old and 1.98 m) is not the defensive anchor he has been throu

The Finals are not being easy at all for Draymond Green. The power forward (32 years old and 1.98 m) is not the defensive anchor he has been throughout his career and he does not flow in attack either, with vision, ball circulation and points… although these have never been many or the top of spear of his team’s offense, but this tie is a bit dramatic: he has the same goals (15) as fouls (15) in the first three games of the series against the Boston Celtics.

“I played like shit,” said Green after being sent off in this morning’s loss in which he scored 2 points, grabbed 4 rebounds and distributed 3 assists in 35 minutes on the court of a TD Garden that was all over him . Sometimes too much about him, with offensive chants that have not liked anything within the Warriors.

“We have played before in front of rude people. Dropping F-bombs with the kids in the stands… Really classy. Good job Boston,” Klay Thompson said of the Celtics fans’ attitude. “With class. Very elegant,” Warriors coach Steve Kerr continued.

The harshest words came from Green’s own wife, who posted a story on Instagram about what happened at a TD Garden that was enjoying a Finals game again 12 years later: “Tough loss tonight, but no way! No way should fans be allowed to sing obscenities at players! Aren’t they human? Is someone at work saying weird things to you?” wrote Hazel Renee.

“The NBA has the audacity to have a full code of conduct card at home about his behavior and how they could get kicked out of a game, but an entire crowd/section/numerous people are chanting ‘fuck you Draymond’ or calling him p… or MF. And nothing?! It’s okay?! Warriors fans would never do it! My kids were at the game tonight listening to that mess! Very gross, Celtics fans. Simply embarrassing”, completed the wife of a Green who had them of all colors with Robert Williams and Jayson Tatum.

The only one who seemed not to care about the matter was the victim himself. “I like to be asked. (…) It’s something I like, they lose a lot of energy talking about me, it’s good. I’m looking forward to Friday”, closed the power forward, who has seen himself in similar situations a thousand times because of a passion that often takes too much of him.