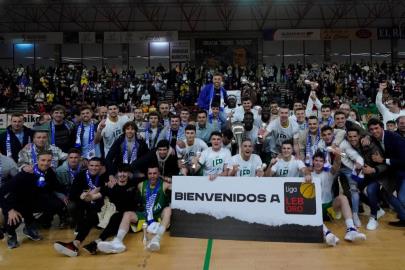 Barely 57 days separate the promotion of the Grupo Alega Cantabria to the LEB Oro as League champion, from that achieved by Bàsquet Girona to the Endesa League after the Final Four played in their locality. Two promotions that arrived just a few minutes apart from those of the football teams in their cities and that, however, have not been the only ones in a 2021/22 season in which football and basketball have been able to walk hand in hand in Torrelavega, Alcantarilla, Albacete, Ourense and Girona.

There were not a few newscasts that opened their sports section last Sunday night with the double promotion of a city of Girona in which its football and basketball teams had been able to achieve their respective promotions to the elite in the same afternoon . A truly unusual fact and that, however, had already had up to four precedents throughout this course in some FEB Competitions in which the unusual has become usual this year.

And it is that in towns as disparate as Torrelavega, Alcantarilla, Albacete, Ourense or Girona itself, their football and basketball teams have jointly celebrated their promotions to a higher category from which they will bring new incentives to their citizens next year. Promotions that came to coincide in a space-time band that thus led players and fans to be able to unify both the previous efforts and the subsequent celebrations.

Torrelavega: Two “book” promotions for the elite of Cantabrian sport

It was the afternoon of April 23 when the city of Torrelavega was completely paralyzed to be able to attend an afternoon for history. A town famous for the usual sports feats of its teams and that was about to live one of those days that end up being remembered forever. The culprits, their soccer and basketball teams who, separated by just an hour and a few kilometers, were able not only to conquer promotion to a higher category, but also to be able to do so as league champions to end up celebrating two titles in a together on the track of Vicente Trueba.

Royal Gymnastic Society: A simple victory away from home on Saturday afternoon (5pm) would have earned the dean of Cantabrian football to be able to complete the league title in the Third RFEF. But Gimnástica de Torrelavega did not want to speculate with the 3 points, signing one of the best games of the season to end up winning by a resounding 0-8 at the Riomar de Castro Urdiales Stadium. In this way, Sesi Fernández’s men conquered promotion to the Second RFEF before heading back to the city of Torrelavega to be able to witness the meeting of a Grupo Alega Cantabria that was going to play for its promotion just an hour later.

Cantabria Group Alleges: It was going to be much simpler a priori for the basketball team since David Mangas’s men were going to jump onto the court of their fort to defend the 17-point difference in their favor after the first leg in Albacete. A meeting in which the stands of the Cantabrian team were filled with 3,000 spectators who rowed in favor of the work to be able to carry their team on wings to the final victory. A honk that came around 8:45 p.m., securing both the league title and promotion to the LEB Gold League and with his soccer teammates already present on the perimeter of the track. In this way, the celebration of the basketball team’s title ended up becoming a joint party for the two teams on the parquet floor to receive the affection of the local fans from the stands.

Alcantarilla: Positioning himself on the national map with a double

The history of sport in Alcantarilla began to change on the afternoon of last Saturday, April 30, when its two main leaders took the first steps towards achieving their dream goals. In the case of the soccer team, achieving a historic promotion to RFEF Third Division with which to burst onto the national map again 37 years later and, in the case of her teammates on the women’s basketball team, taking the first step in a Final Four that, just a few hours later, it would take them to reach the LF Endesa just a few meters away from their neighbors’ field. A double success with which to give local sport a new dimension.

Sewer Soccer Club: The Final Phase of the LF Endesa arrived at the Pabellón Fausto Vicent de Alcantarilla on the afternoon of Saturday, April 30, but fate would have it that, during its first hours of play, its leading role was shared with the meeting of the local soccer team. Because Alcantarilla FC was going to play, in the same time slot, the most important match in its recent history. And he was going to do it wall to wall with the basketball team’s court in a clash in which the team coached by Víctor Pagán managed to beat CD Juvenia de Pozo Estrecho 3-0. A victory whose echoes pierced the walls of the pavilion and that took the team to the national category almost four decades after its last participation.

Jairis Global Hozone: And if first it had been the soccer boys, a few hours later it would be the women’s basketball players who would assume the responsibility of being able to fight for promotion. First, defeating Vantage Towers Alcobendas in the semifinals to gain access to a Final in which the all-or-nothing promotion was going to be played against Recoletas Zamora. A game that Lucas Fernández’s side were able to resolve in their favor, thus reaching the LF Endesa for the first time in its history. A second ascent in less than 24 hours for a city dedicated to its teams.

The city of Albacete stood out in the world of sports for its role in the First Division of football in the 90s, but the fall of “Mechanical Cheese” to the Second Division began a long journey through the desert that seems to have already reached its end. finish. Or at least that is how its two main references have tried, a Bueno Arenas Albacete that has shone in the LEB Plata League to be able to win promotion to the LEB Oro League as well as an Albacete Balompié that broke pools by winning promotion to the SmartBank League.

Well Arenas Albacete: They had been able to finish the season as champions of the Eastern Conference and that allowed David Varela’s players to fight for promotion in the LEB Plata League Final. A tie in which the cross came out for their interests, but that was only going to extend the desire of the La Mancha team to be able to make the leap to the LEB Gold League. Thus, the second opportunity ended up being the definitive one in some final Playoffs in which the Bueno Arenas Albacete did not fail culminating the ascent after a comeback against the subsidiary of Valencia Basket. A May 21 for the history of the entity, but also of a city that saw how the sport of the basket was at the height of the main sporting feats of the town.

Albacete Football: Responding to the sports “ordago” launched by their basketball neighbors, the Albacete Balompié players needed just 21 more days to be able to match the feat. Because on the night of June 11, the city’s soccer team managed to break any kind of forecast by winning promotion to the Second Division on the Riazor pitch. A victory against Deportivo de la Coruña that was going to allow the La Mancha team to “equalize” the category with the basketball team for the next campaign in which both teams will take a new leap together.

Ourense: Recovering its place in a year of triple growth

Ourense sport needed a year of happiness with which to recover its traditional position in football and basketball and this seems to have arrived in 2022 in which promotions have occurred threefold on the banks of the Miño. Because the success of Guillermo Arenas’ team, recovering its status as LEB Oro a year after its relegation, has been accompanied by replicas in football where UD Ourense and Ourense FC have not wanted to be left behind in their respective climbs.

UD Ourense and Ourense FC: There are two football projects that the city of Ourense has trying to recover the vacancy that was generated with the disappearance of CD Ourense in 2014. And both have been able to take a step forward this season, the first being UD Ourense with its promotion last May 15 to the Third RFEF and, the second, Ourense FC promoting just seven days later to the Second RFEF by the hand of Ourense Baloncesto (May 22).

Inherits Ourense Bto: And it was, the same day that Ourense FC achieved promotion, when Hereda Ourense was able to say again that “we are from LEB Oro”. Because, with Guillermo Arenas at the helm, the people of Ourense culminated a season of ups and downs in the best possible way, confirming their jump in category in a final Playoff tie in which they had to overcome EnerParking Navarra. Quite a liberation before his public and that meant the takeoff of the sport not only of the basket, but also of his soccer neighbors in a magical week for the city.

Girona: The great sports explosion, in four hours for history

And we arrived at the afternoon-evening of June 19! Because that date will remain etched in fire over the years in the sporting memory of the city of Girona. A day in which the football team was able to return to the national First Division just a couple of hours after the great sporting feat of the year in national sport, the promotion of Bàsquet Girona to the Endesa League. A return to the basketball elite 14 years later and hand in hand with a project led by Marc Gasol whose efforts to help “his city of him” had ended up bearing the desired results.

Basketball Girona: They had not started the season very well with a balance that did not invite optimism (2-7), but the arrival of Marc Gasol in their ranks back in November began to change the timeline of a Bàsquet Girona that was burning stages in the competition until being able to reach the fight for promotion. A unique opportunity that led the club to request the organization of the Final Four in Fontajau in order to have the facto field in its favor. Elementó that ended up being key to being able to defeat ICG Força Lleida on Saturday afternoon before playing the promotion to a single card on Sunday afternoon against Movistar Estudiantes. And once at that point, the people from Girona did not fail with a stellar Marc Gasol on the track and a real party in the stands. The first ascent of the day thus arrived in Fontajau giving way, just a few minutes later, to a football team that was going to play theirs from the distant Canary Islands.

Girona FC: Bàsquet Girona had not yet finished celebrating its promotion in Fontajau when the team’s arrival in the locker room coincided with Girona FC’s first goal in Tenerife. A first step for a night in which the people from Girona were going to finish the Playoff with a 1-3 in their favor that would mean their return to the highest category of national football three years later. A meeting from the distance of the Heliodoro Rodríguez that led to a joint party with the basketball team on Monday afternoon. And it is that both teams thus culminated a year of joint success reaching the elite of their respective sports.

Tags: princess cup, television basketball, rankings
Dallas Mavericks retired number 41 in honor of Dirk Nowitzki
The presence of Juan Toscano in the Finals is ‘gratifying’
The teams that will play the Playoffs and the mini Play-in tournament were defined
FOOTBALL 3092