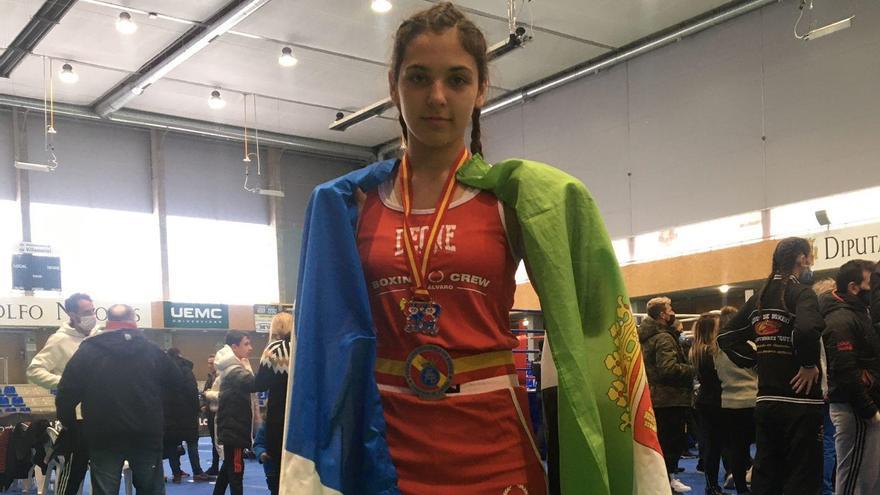 The young Xurima Acosta, from Don Álvaro, has been proclaimed champion of Spain in boxing at school age in the -50 kg category.

The young Xurima Acosta, from Don Álvaro, has been proclaimed champion of Spain in boxing at school age in the -50 kg category.

The championship, organized by the Spanish Boxing Federation, has been held in Villamuriel de Cerrato (Palencia) and has had 51 athletes from all over the national geography who have competed in the Schollboys and Schollgirls modalities.

The young boxer from Extremadura defeated Paula García from Madrid in the final, by unanimous decision. The podium was completed by the participant from the Basque Country Eider Zabala.

Xurima Acosta, a native of Don Álvaro and daughter of the illustrious boxer Pedro Acosta, trains under the command of Raúl Camacho in the CD Boxing Crew Don Álvaro, a club that has been achieving great successes at the national level for some years with different boxers, despite belonging to a town of only 800 inhabitants. With this recent success, the club already has two Spanish boxing champions in its ranks.

“I am very happy for Xurima and her family,” says coach Raúl Camacho, “and for knowing that we are doing things well. We must not forget that Xurima is still in the training stage and our goal now is to go little by little, respecting her evolutionary stages and accumulating experiences of this type, at the highest national level, to make her a more complete boxer ».