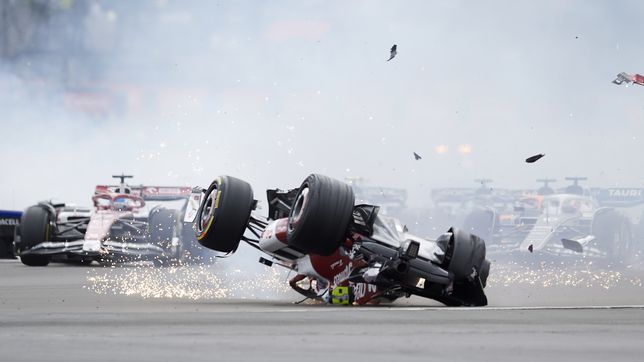 The halo, a safety device made of titanium that covers the cockpit and protects the rider's head, was heavily criticized when it was introduced in

The halo, a safety device made of titanium that covers the cockpit and protects the rider’s head, was heavily criticized when it was introduced in 2018 by various sectors of the paddock. Aesthetically, the single-seaters lost their appeal with such a cumbersome contraption. Five years later, the element that Charlie Whiting, the FIA ​​race director who died in 2019, lobbied so hard for, has prevented at least four tragedies in Formula 1 alone. Leclerc in Belgium 2018, with Alonso flying over his head at the start; Grosjean at Bahrain 2020, embedded in the guardrail before the car caught fire; Hamilton at Monza 2021, Verstappen’s wheel touched his helmet; and now Zhou, protagonist of one of the most chilling accidents of recent times.

At the start, Gasly found himself sandwiched between Zhou and Russell and the Alfa Romeo collided, wheel to wheel, with the Alpha Tauri. The worst part was taken by the Chinese, whose car took off and landed upside down to travel dozens of meters at high speed. The halo withstood the impact and all the scratches. On the gravel, the Alfa again took height to fall, converted into a mass of carbon fiber, between the tire barrier and the safety fence. Russell rushed over to help the stewards when he saw Zhou’s situation. But the young and fast Chinese, one of the pleasant surprises of this season (he has five points and has made good classifications), was conscious and had no major injuries, apart from bruises. He took a harder hit to Albon, affected by the incident on the straight, and was evacuated to hospital, but only as a precaution.

“It’s crazy that you can get out of that accident”

“The work to improve safety in F1 is never done, but once again we must thank the FIA ​​and Formula 1 for all the progress,” said team principal Fred Vasseur. As for Zhou: “The halo saved me. Thanks to the stewards and the medical team for their quick response. I’m looking forward to getting back on track in Austria more than ever to do what I love the most.” He was reborn.

Not all drivers were left cold by the violent bump during the red flag. Some, like Sainz, preferred not to see the images until the race was over. “When I saw him before the podium I was shocked. It’s crazy. It is completely incredible that he can get out of that accident and he shows that, although we sometimes criticize the FIA, in these cases we can only say how much they help us. In the morning there was another accident in Formula 2, they probably saved two lives in one day”, said the winner. Sergio Pérez, at his side, took up an old debate with good timing: “Then you hear people talking about putting a cap on pilots’ salaries, that we are the ones who take risks and put on a show… although the most important thing is that no one left injured”.

The biggest Formula 1 winner in 2021
Juan Pablo Montoya surprises driving an F1 Ferrari
When is the next Formula 1 race? All the details towards the Austrian Grand Prix
FORMULA 1 2047