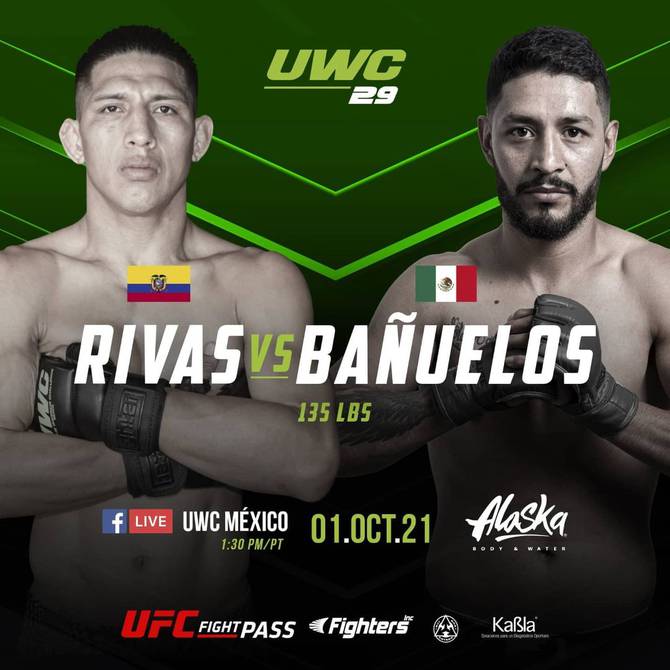 They will be broadcast on the UFC Fight Pass streaming platform.September 23, 2021 - 4:35 pmThree of the ten professional fights scheduled for the

They will be broadcast on the UFC Fight Pass streaming platform.

Three of the ten professional fights scheduled for the UWC 29 function on October 1 in Tijuana, will be carried out by Ecuadorian fighters who train in Mexico. This is what the Ultimate Warrior Challenge México (UWC) company has announced on its Instagram account.

Cristhian Rivas will face the Mexican César Banuelos in a duel agreed to at 135 pounds, Adrián Luna Martinetti will collide with the Argentine Francisco Sola in the 145-pound division, and César Abad is waiting for the presentation of the identity of his contender.

Both Rivas and Luna Martinetti will make their UWC debut. Abad, on the other hand, will have his second fight since winning at UWC 26, last April.

So far, the company has confirmed that the fight that Luna Martinetti will fight corresponds to the main event (main card) of UWC 29.

The star of the night will be for the featherweight championship when local Luis Meraz (6-0-0) defends the title against Argentine Emanuel Rivero (9-8-0), while the preliminaries will be led by the championship duel vacant bantamweight, when Brazilian Soslenis da Silva Carvalho (13-12-0) faced Mexican Paulino Siller (7-1-0).

Along with this in the stellar, in a combat agreed to 120 pounds, the Mexican Sandra Chimeyo will face the Chilean Jennifer González Araneda.

Justin Gaethje recaps his loss to Khabib Nurmagomedov at UFC 254
UFC: Another spectacular KO for the fast track of Cris Cyborg
UFC: How much does Ngannou have left in the UFC? The details of his contract confuse his fans
UFC/MMA 336

Loading...
Newer Post
Ronaldo hit the Super League with a message
Older Post
they call her the Cobrita and her style reminds of Lomachenko and Nicolino Locche