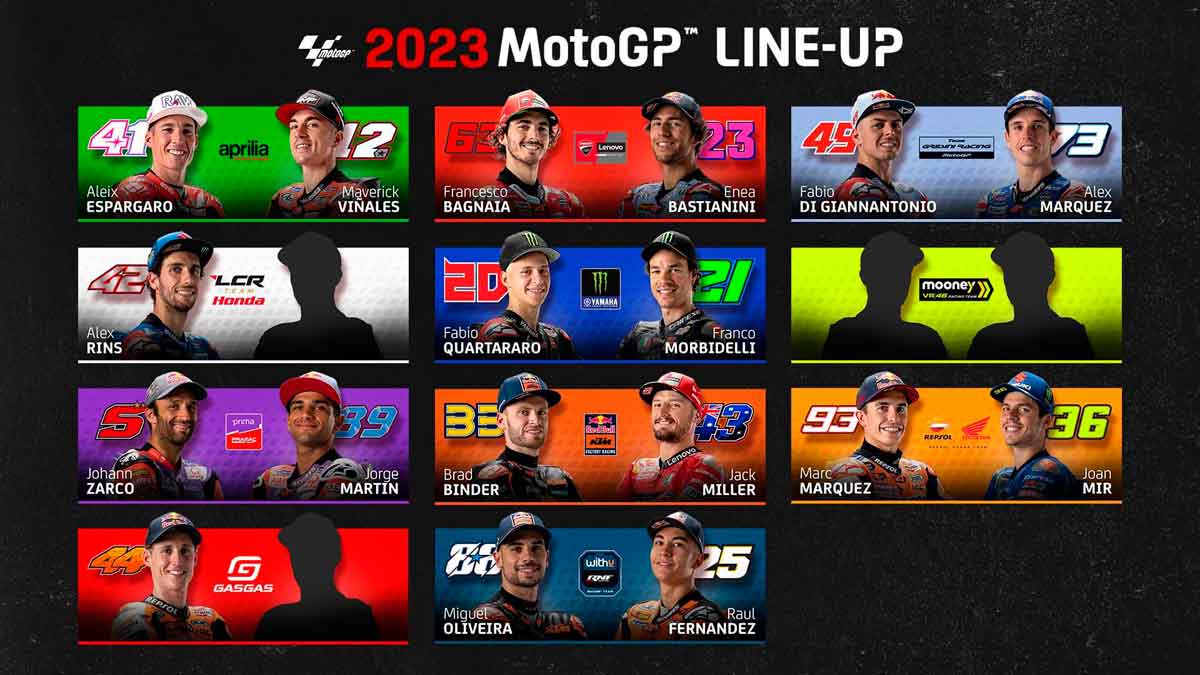 Only 4 places remain to complete the grid of drivers who will take part in the MotoGP World Championship 2023. After confirming the arrival of Joan

Only 4 places remain to complete the grid of drivers who will take part in the MotoGP World Championship 2023.

After confirming the arrival of Joan Mir to the Repsol HRC as a new partner Marc Márquez for the next season, the signings of Alex Marquez, Alex Rins, Pol Espargaro and Raul Fernandez for him Gresini Racingthe LCR Honda Castrolthe GasGas Factory Racing and the Aprilia RNF or the ‘renewal’ of George Martin for him Ducati Pramaconly four places remain to be confirmed in the maximum class, in MotoGPfacing the grill for the next season, 2023.

To be exact, we still don’t know which driver will accompany Rins in the LCR Honda. In principle, this place must be for a pilot of the LCR Honda Idemitsu. The Japanese Ai Oguraof Idemitsu Honda Team Asia and current leader of Moto2, is one of the drivers with the most numbers to be chosen. But this would mean that Takaaki Nakagami he would lose his spot. To date, ‘Taka’ has received great support from within LCR Honda and keep your options intact.

Pol and Augusto together?

We also do not know who will accompany Pol Espargaro in the new GasGas Factory Racing Team. From 2023 the iconic Spanish motorcycle brand will join the universe of MotoGP in an agreement that makes the Tech3 Factory Team dyed red GasGas. The renowned race-winning team will be equipped with the technology GasGas of MotoGP and will put the machinery in the hands of the youngest of the Espargaró, together with a second pilot who could be Augusto Fernandezone of the main contenders for the title in Moto2 East 2022 and that a great season is curdling in the Red Bull KTM Moto2 Garlic next to the ‘rookie’ Peter Acosta.

Finally, the Mooney VR46 Racing Team of valentino rossi It has not yet confirmed its two drivers for next year. Nowadays, Luca Marina and Marco Bezzecchi They are the ones who drive the two motorcycles of the satellite squad of Ducati. And everything indicates that they will continue to be them in 2023. However, his compatriot Celestino Viettienrolled in the same squad but competing in Moto2could make the jump to win the title in the intermediate class to the detriment of Marini or ‘Bez’.

We’ll see how it all works out.

MotoGP – Spanish GP 2022 | Jerez: The push and pull of Quartararo, with Oliveira in the chamber
GP Emilia Romagna MotoGP 2021: Quartararo and Bagnaia, to the repechage in Misano
MotoGP 2022: Pons: “The goal is still the title with Canet”
MOTOGP 789