This Saturday, boxing event in Albacete, with Fight Dreams 9 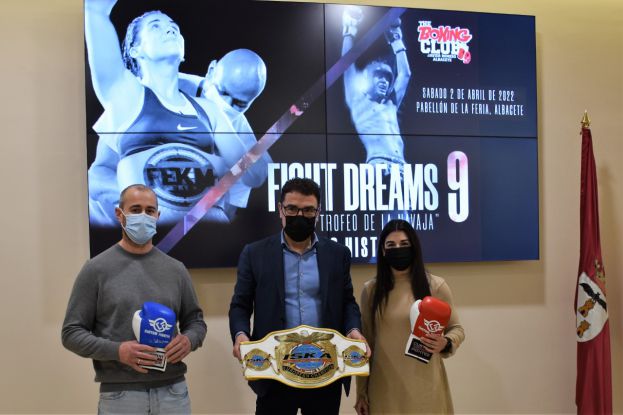 The Plenary Hall of the City Council of Albacete has hosted this morning the presentation of the Fight Dreams 9 Knife Trophy, which will be held t

The Plenary Hall of the City Council of Albacete has hosted this morning the presentation of the Fight Dreams 9 Knife Trophy, which will be held this Saturday, April 2, from 5:00 p.m. in the Sports Center Pavilion of the Fair, an event “ which has turned our city into the headquarters of the best national and international kick boxing”, according to the Councilor for Sports, Modesto Belínchon.

And it is that this Trophy of the Razor has managed to awaken “a great hobby and the recognition and support of public institutions”, pointed out the organizer of the championship and head of Boxing Club Albacete, Francisco Javier Romero Martínez, who has been accompanied by the Atenea Contreras from Albacete, candidate for the European Championship. In this ninth edition, Fight Dreams will include the European Professional Championship, as well as international boxing matches and the best amateur kick boxing.

Thus, in boxing, the public that attends the Fair Pavilion from 5:00 p.m. on Saturday will be able to enjoy six fights that will be played by a good number of boxers from Albacete, while in the professional part there will be three national super fights and one international super fight . Also, in the amateur part, a team from Albacete will face a national team. Regarding the ISKA Professional European Championship, the combat that will be played will be in the 52 kilos category; modality, K-1, and will feature Marine Mazeau, from France, and Atenea Contreras from Albacete.

The Councilor for Sports has indicated that the City Council will continue to support the holding of events of this type in all sports disciplines, “because we want Albacete to be known as the city of sports, and for this, it is evident that we need the support and complicity of clubs, federations and athletes”.

For his part, Javier Romero has referred to the “great effort of organization and investment” that a championship of these characteristics requires, for which he has encouraged the Albacete public to enjoy these sporting events, “which take place in a very good environment ”.

Finally, Atenea Contreras stressed that “I am going to give my best in this fight, which is possible thanks to the work of my coach -Javier Romero-, and playing it at home, in front of our public, is another boost in this new challenge in my professional career.