Those summoned from Chile for the Qualifiers, with three from Argentine football and one return

Those summoned from Chile for the Qualifiers, with three from Argentine football and one return

Martín Lasarte, coach of the Chilean national team, confirmed the list of those summoned for the triple round of Qualifiers towards the World Cup in Qatar 2022, where La Roja will be measured against Peru, Paraguay and Venezuela, with the return of forward Alexis Sánchez, among others news. 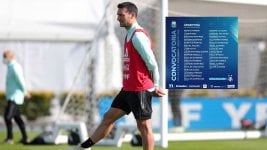 The current Inter striker, former River footballer, returns to the national team (he missed the last window due to physical discomfort) who needs goals to add triumphs, in order to access the classification zone. He also called Ben Brereton, the striker for England’s Blackburn Rovers, and the first summons of the youthful Bastián Yañez stands out.

In turn, the coach cited three Argentine soccer players: goalkeeper Gabriel Arias, latral Eugenio Mena (Racing) and defender Paulo Díaz (River). The defender of the Academy felt a muscular discomfort and left in the first half in the match against Argentinos.

Those summoned from Chile for the Qualifiers, with three from Argentine football and the return of Alexis Sánchez

Chile has seven points and is six behind Colombia (13), which occupies the fifth position, in the playoff zone. The team led by Martín Lasarte needs an urgent victory to dream of qualifying for the next World Cup: they will face Peru in Lima on Thursday, October 7; on Sunday the 10th to Paraguay in Santiago and on Thursday the 14th to Venezuela at home.

Loading...
Newer Post
NBA: Follow the thing with the anti-vaccines in the NBA: “Why do the vaccinated continue to get infected? It only reduces the chances of going to the hospital”
Older Post
He retired from football and has earned 7.5 million euros