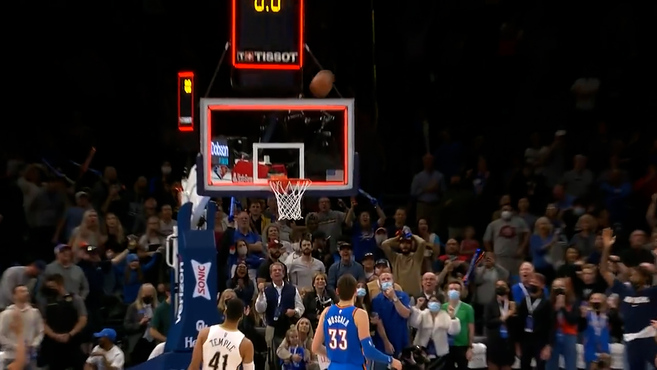 Updated 12/16/2021 - 08:21 Devonte 'Graham noted the longest winning basket in NBA history, according to data from Basketball Reference. The bas

Devonte ‘Graham noted the longest winning basket in NBA history, according to data from Basketball Reference. The base of the Pelicans he put it from 21 meters on the horn to give the victory to his team against the Thunder. In a mad ending Shai Gilgeous-Alexander tied at 110 with a forced triple in which he could also receive staff with 2.3 to go and when everything pointed to extra time an amazing shot came that unleashed madness in the team of New Orleans.

“Josh hart He passed it to me and I let it fly, “Graham summed up about a play that is already NBA history.” I thought he was going to enter but, at the same time, when he entered, I did not believe it, “he said. Brandon ingram, who scored 34 points.

Jonas Valanciunas he added 19 + 16 and the hero Graham finished with 15, all from 3s. The Spanish Willy Hernangómez He added seven points and three rebounds in the 13 minutes he had.

The reactions in the Thunder were of deep disappointment. Kenrich williams he tried to pressure Graham on that last shot, but “I didn’t want to foul, make a stupid play. I just tried to show my hands. I knew he was going to try to shoot. And he went in, so you have to take your hat off to him. “. Gilgeous-Alexander, who scored 33 points, could only put on a shocked face and put his hands to his head after seeing the miraculous triple come in.