Tickets for the Fuengirola Tournament are on sale 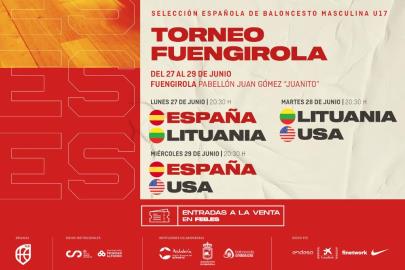 The Fuengirola tournament will be the last stop for the Spanish U17 team before the Andalusia World Cup to be held in Malaga from July 2 to 10. In this friendly tournament, one of the games with the most expectation in training basketball will be experienced, a Spain-United States. The friendly tournament table is completed by Lithuania and the Dominican Republic.

Thus, from June 27 to 29, the Juan Gómez Juanito pavilion in the town of Fuengirola will host these meetings that aim to finalize the preparation for the international event. This Tuesday the presentation was held and after that, they left Tickets for the meetings are on sale.

Spain will play the first game on Monday the 27th against Lithuania at 8:30 p.m., while the second match will be played on Tuesday the 28th against the Dominican Republic (6:00 p.m.). These two teams will be very useful for the team led by Javier Zamora, since both teams are drawn together with Spain in group B of the World Cup, which is completed with a team from Asia yet to be decided.

Tags: players, basketball referees, Statistics
Movistar Students organizes a trip to Valladolid for its fans: “You pay the ticket and Movistar the bus”
Nets vs. 76ers | NBA 2022: James Harden lives a nightmare against his ex: fatal game and injury against the Nets. Do the ghosts of the Playoffs revive?
Dallas Mavericks retired number 41 in honor of Dirk Nowitzki
TICKETS 166