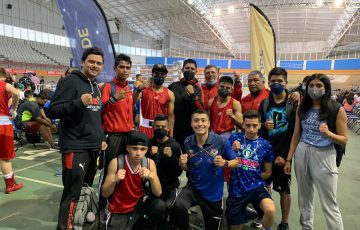 TLAXCALA, Tlax., November 8, 2021.- With two bronze medals and one silver, it is how the Tlaxcala boxers ended their participation in the National Elite Boxing Championship and the 2021 Children’s and Junior Olympic Boxing Festival, which took held at the State Council for Sports Promotion (Code) of Guadalajara, Jalisco.

Tlaxcala won the silver thanks to the boxer from the municipality of Tlaxco, Daniel Sosa Guerra, of the elite category, 48 kilograms after giving his best in the ring.

The bronze medals fell into the hands of boxer Alan González Lemus, from the municipality of Ixtacuixtla, participant in the children’s category, 38-40 kilograms, and Alam de la Luz Galindo from San Pablo del Monte, from the elite category of 63 kilograms .

In this regard, the head of state coaches, Octavio Lozano Saavedra, explained that the result of the medals was positive, because out of nine Tlaxcala fighters, three obtained an award.

He thanked the support of the Tlaxcala Sports Institute (IDET) and the Mexican Boxing Federation, which is a strengthened association with young people in search of new opportunities and prepared to provide good results.

Likewise, he mentioned that there is sufficient confidence to face the regional stage of national games, since the boxers have trained for a year, as well as working meetings with the coaches to achieve positive results in the boxing fair.

Valle Viejo has its boxing commission
Boxing: scar de La Hoya offers Mayweather 100 million to fight him
They arrested a woman for the stabbing crime of a 21-year-old boxer
BOXING 889