Tonight there is MMA and kickboxing in Hispaniola 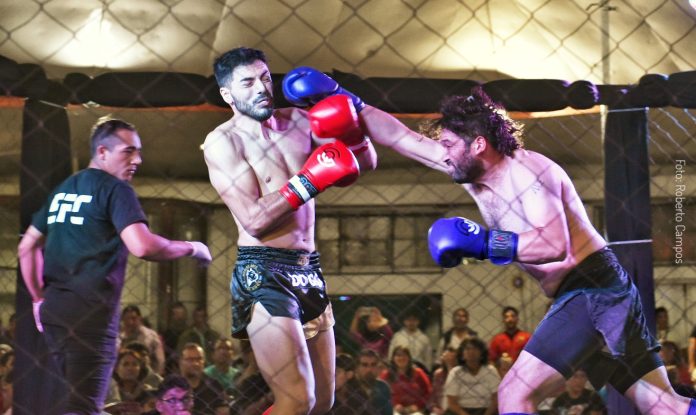 This Saturday, starting at 8:00 p.m., at the Sociedad Española, there will be a new evening of kickboxing and Mixed Mart

This Saturday, starting at 8:00 p.m., at the Sociedad Española, there will be a new evening of kickboxing and Mixed Martial Arts that will feature more than 20 amateur, semi-professional and professional fights with local exponents and from different parts of the country. In addition there will be an international fight for a title. It will be the last event of the year organized by the CIAM Gymnasium.

Roy Willhuber, in charge of the CIAM Gymnasium and organizer of this year’s second event “EFC Cage Fights”, told in dialogue with The cover who are finalizing the details for what will be a great night of kickboxing and Mixed Martial Arts (MMA) fights in Esquel.

“It will be the last event of the year and there will be an international fight for the UDC semi-professional kickboxing title between the Chilean Guillermo “La dinamita” Villagrán and the Argentine Gabriel “El Nervoso” Montenegro in 56 kilos”ad.

The organizer also highlighted that there will be more than 20 fights during the evening. “We are going to have high-level fights such as professional MMA fights like the one with the local Manuel Cantero, a well-known exponent in the environment, and Roberto Díaz, who also has a great endorsement in all contact sports,” highlighted.

The cage fighting event will be this Saturday, August 27, starting at 8:00 p.m. at the Sociedad Española, located between Rivadavia and Miter streets in the city of Esquel. There will be amateur, semi-professional and professional fights with local exponents and from El Bolsón, Bariloche, Ingeniero Jacobacci, Comodoro Rivadavia, Trelew, Rawson, Sierra Grande, San Antonio Oeste and Chile.

During the evening there will be a professional women’s fight between Rocío “La carnicera” Collado and Michay Fernández in the category up to 54 kilos.

Roy maintained that the organization of an event of these characteristics implies a great deal of responsibility and an important investment, but he recognized the impact it has on sports and tourism. “The previous event had a lot of repercussion, we had the presence of many people, so we bet on this project again because we know that it also generates a tourist movement for the city since many people like to come to Esquel, enjoy the snow and visit the different tourist attractions that we have”, highlighted.

He also noted that “Mixed Martial Arts (MMA) are constantly growing in the city and the region, so this time there will be more MMA fights than kickboxing because people like to watch them.”

He recognized that it is not easy to get this type of fight because not everyone is giving this discipline and also because many do not dare to fight. “Mixed Martial Arts is the current combat sport with the greatest contact that exists”, he claimed.

This sport allows both the use of techniques to fight standing up or punches (punches, kicks and knees), as well as techniques to fight on the ground or grabs (takedowns, throws, joint locks and chokes) as well as the combination of both (grabs with punches coming from a wide variety of martial arts and combat sports, it is generally used for competition but also for self-defense.

While kickboxing is the combination of two previously existing disciplines: Japanese karate and Western boxing. It is a contact sport that alternates punches typical of boxing and kicks of martial arts.

Both sports can be practiced at the CIAM gym, located at Diagonal Rossi 162 in the city of Esquel.

Loading...
Newer Post
F1 2022: Daniel Ricciardo will be out of McLaren; Piastri, the chosen one for 2023
Older Post
Result of Free Practice 3 of the F1 Belgian GP