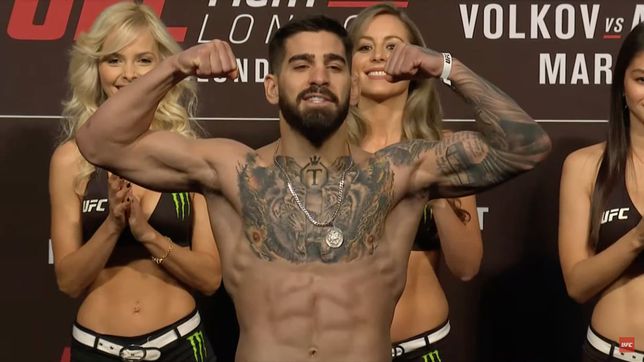 The Hispanic-Georgian Ilia Topuria and Edson Barboza were going to star in the co-main event of the UFC Vegas 63 on October 29. Due to a knee inju

The Hispanic-Georgian Ilia Topuria and Edson Barboza were going to star in the co-main event of the UFC Vegas 63 on October 29. Due to a knee injury to the Brazilian, this fight cannot take place and Barboza has already undergone surgery to treat the injury. It has not yet been confirmed whether they will look for another opponent for Topuria or they will wait for the Brazilian to recover to fight.

Ilia Topuria is the most acclaimed mixed martial arts fighter in Spain. He remains undefeated with 12 wins, 4 of them by knockout, 7 by submission and one by decision. In his last fight, the Hispanic-Georgian fighter defeated Jai Herbert at UFC London by KO in the second round. Barboza, on the other hand, is not at his best. He was riding a two-fight losing streak that he was looking to break in this matchup. It is not yet known whether they will find another rival for Ilia Topuria so that he can fight at UFC Vegas 63 or they will wait for Edson Barboza to recover and have the agreed fight.

Topuria in ‘The Resistance’

El Matador was a star guest on ‘La Resistencia’, David Broncano’s famous talk show. In addition to doing the viral TikTok trend of hitting each other in the face with pancakes, Ilia Topuria talked about his career and his upcoming match. Before learning that Edson Barboza could not fight due to a knee injury, the Hispanic-Georgian fighter said that Barboza “was going to fight the next world champion.” When Broncano asked him if he thought the fight would go to points, Topuria replied without thinking that “the fight is three rounds and I have two to spare.”