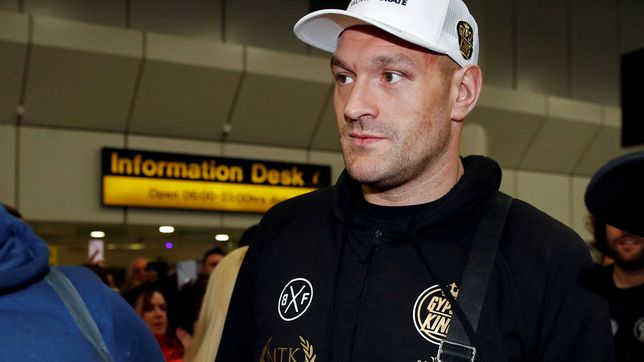 After his fight against Dillian Whyte, Tyson Fury surprised when he decided to retire from boxing in April. However, Bob Arum, Eddie Hearn and oth

After his fight against Dillian Whyte, Tyson Fury surprised when he decided to retire from boxing in April. However, Bob Arum, Eddie Hearn and other promoters keep trying to convince him to come back.

There are several options that have been handled for the 33-year-old British boxer to return, but he warned that “if they want to take me out of retirement, they will have to pay me $500 million dollars.”

YOU MAY ALSO BE INTERESTED: Cuban Robeisy Ramírez knocks out Abraham Nova and wins the WBO global featherweight title

One of the main options is to fight against Francis Ngannou. Promoter Bob Arum wants to get the UFC star into the ring to face Fury. It is an option that does not sound so far-fetched.

One fight many want to see is Tyson Fury taking on the winner of the rematch between Anthony Joshua and Oleksandr Usyk. However, the bag would have to be too attractive to bring Fury out of retirement.

The WWE Clash in the Castle event, the most important in the United Kingdom, could be the incursion of ‘Gypsy King’ into the luchistic company. However, it is unlikely to be a permanent move.

Floyd’s easiest fight was against Canelo, says Leonard Ellerbe president of Mayweather Promotions
“It has changed my life”
Floyd Mayweather announces that he is returning to boxing in February to do several fights. This is your plan and your possible rivals
BOXING 3117

Loading...
Newer Post
Four players of the soccer team, positive for coronavirus after the weekend off
Older Post
Mexico has its representatives ready for the Golf Junior World Cup