Tyson Fury confirms his return in search of the trilogy 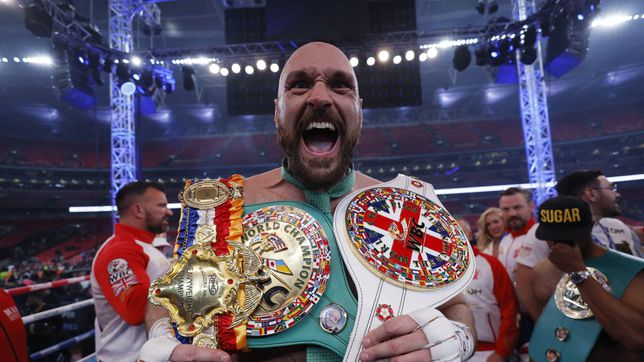 The always striking Tyson Fury announced through a publication on his social networks, together with his trainer, what almost everyone in boxing su

The always striking Tyson Fury announced through a publication on his social networks, together with his trainer, what almost everyone in boxing suspected: he is getting back into the ring to win the trilogy against Derek Chisora. This comes just four months after announcing his retirement after beating Dillian Whyte at Wembley in April and thereby reclaiming the heavyweight belt from the interim holder in what seemed like an idyllic ending for him. Although the announcement, in the same combat ring, was official, few believed that this withdrawal would be true.

This disbelief translated to the point that the World Boxing Council itself would not take the belt from him, assuming that he would return sooner or later. Finally, it has been so and the King of the Gypsies will get into the ring to face Derek Chisora, to whom he has sent a clear message days before through Instagram stories. “This goes to Chisora. Derek, you’re running from the trilogy. You call yourself ‘War’, but you should be called ‘Chicken’ because you’re running from the trilogy and the biggest payday of your career. Get them to sign the damn contract.” With these statements, the British showed his interest in boxing with whom he was his friend.

And it is that the peculiar relationship of friendship of these two boxers was cut short when in the April fight, Chisora ​​showed his public support for Whyte, to the detriment of his compatriot Fury, something that the latter did not take well at all. This will be familiar to Fury, since something very similar happened to him with Dillian Whyte, who became his sparring partner and partner, with whom he established a great relationship that today is broken. This trilogy is preceded by the one achieved by Fury against Deontay Wilder and it would be the third victory for Fury against Chisora, taking into account that the first two times (2011 and 2014) they fell on Tyson’s side. If Fury ends up winning, he would become “the first boxer to achieve it”, as he himself pointed out in his Twitter video.

Finally and according to what everyone believed: that Fury would only get into the ring to fight to be the undisputed world champion, the boxer has surprised many with this fight in which there will be no belt at stake but enormous expectations about what this fight between the two can bring, which today has no date but confirmation.