UFC: Dani Brez sweeps the UWC and will fight for the 125-pound title 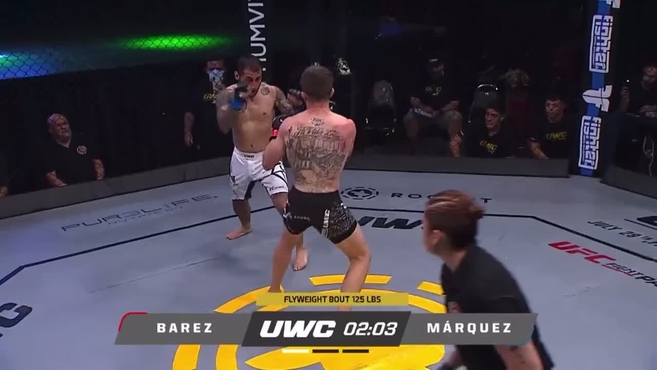 Dani Brez is still in the fight for the UFC. The Valencian fighter has debuted in the UWC with a resounding victory against Paul Marquez Moreno.

Dani Brez is still in the fight for the UFC. The Valencian fighter has debuted in the UWC with a resounding victory against Paul Marquez Moreno. An incontestable victory that was forged in the first round by a resounding KO.

Thus, Brez is running as the first contender for the 125lbs belt in the Mexican Ultimate Warrior Challenge league. Brez gave his rival no choice from the first second of the fight. The Spaniard planted a standing fight and dominated the round at all times. Two minutes into the fight, after conceding a devastating left hand to his rival, a combined hook and uppercut attack sent Mrquez to the canvas and the fight is over.

In this way, Dani Brez returns to the international front line after the loss he suffered last October at Dana White’s Contender Series against the North American Carlos Hernndez by split decision (29-28, 8-29 and 29-28).

At that time the contract with the UFC slipped away. Now Dani Brez returns with everything to the big leagues. It’s about the finish number 11 of 14 victories (6KO/TKO, 5SUB) The dream of the Valencian is once again very present.

Tags: sports Center, fighting-ufc, sport - boxing
UFC: Masvidal loses to Covington… And he attacks him on the street!: “This is how things are resolved in my neighborhood”
UFC: The video of the police chase Connor McGregor on the highway: he was arrested
UFC: Two UFC fighters punch each other while attending a match
UFC/MMA 1079