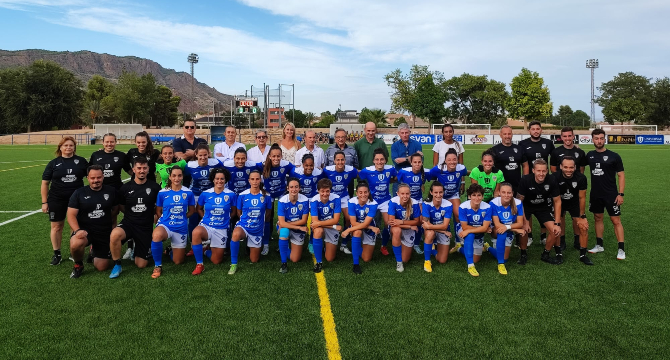 Equality, youth and sport are the values ​​that best define Alhama Féminas, the only football team —both male and female— in the Region of Murcia

Equality, youth and sport are the values ​​that best define Alhama Féminas, the only football team —both male and female— in the Region of Murcia that plays in the highest category: the First Division. Universein perfect harmony with these ideals, becomes its proud sponsor. The Higher Institute of Vocational Training is thus allied with one of the greatest exponents of regional sport, which has reached the elite of Spanish football showing commendable tenacity and humility.

Alhama Féminas is now reaping the fruits of a long walk through the desert since its foundation, in 2008. After last year’s successful campaign, in which it only lost four games in the entire league, promotion became just perseverance award. Alhama was the highest scoring team in the category, with 65 goals, and the third that conceded the fewest. A solidity that earned him the victory in 18 games and finished in first position.

The new season, the first in history with a women’s soccer team from the Region settled in the First Division, is an exciting as well as a difficult challenge, in which Universae hopes to become a talisman. The Higher Vocational Training Institute is one of the main sponsors and therefore appears in a preferential place on the kit.

Through this sponsorship, the teaching company demonstrates its firm commitment to sportone of the best tools to instill such important values ​​as solidarity, teamwork, equality and effort. Universae thus puts its grain of sand so that Alhama Féminas competes in a league in which authentic sports and economic transatlantic militate, such as Real Madrid or Fútbol Club Barcelona.

The official presentation of the team took place on Friday at the Guadalentín Sports Complex, home of Alhama throughout the campaign. There, the local team faced an old acquaintance: Granada CF. The Andalusian team was a tough competitor last season, in which they fought at all times to reach the leadership of the Second Division. On this occasion, Alhama won 2-0 thanks to goals from Kuki and Helena Torres and managed to keep the Villa de Alhama trophy at home.

Tags: business, sponsorship
The 15 most valuable footballers who left Argentine football in this transfer market
The rule that drives the sale of players in Chilean soccer
they launch the first virtual football tournament with stars
FOOTBALL 3677