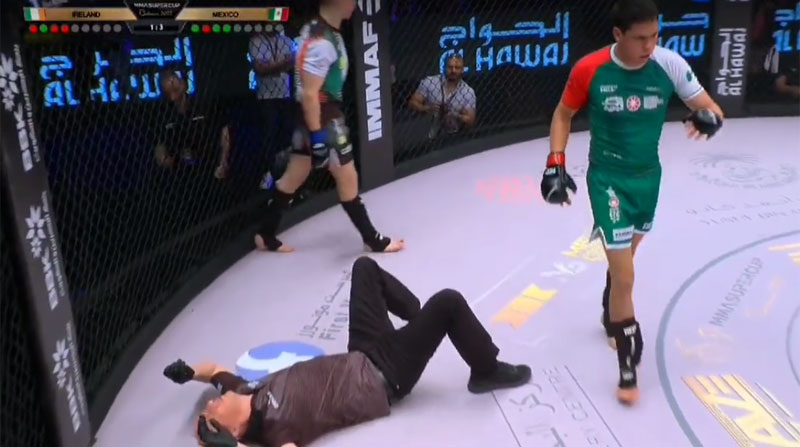 A referee mixed martial arts (MMA) attempted to separate two fighters at the end of a round, but received a tremendous blow which left him lying on the canvas. It happened in a company fight BRAVE Combat Federation.

The referee Scott Manhardt sought to separate the irish Lewis Byrne and the Mexican Luis Gonzalez when the whistle sounded to account for the end of the second round.

However, at that precise moment the Mexican somersaulted to try to hit his rival with a kick with his heel. Such was the referee’s bad luck that he was kicked in the head and fell to the ground in a daze.

Fortunately, the referee was able to rejoin after a few minutes and continued with his work.

“Protect yourself at all times… 🤦🏻‍♂️🤣 PS. I got up and finished the fight, ”the professional referee posted on his social media.

So a referee just got KO’d by a rolling thunder during @bravemmaf‘s IMMAF Super Cup 2022 Semi Finals… 👀@mmasupercup | @immafed pic.twitter.com/Igf9ARht4S

in the account of Twitter of the company it is mentioned that BRAVE Combat Federation is the fastest growing MMA promotion in the world born in the Kingdom of Bahrain.

The ‘Chito’ Vera 🇪🇨 returns to the octagon! The date of the main duel of the Ecuadorian against Rob Font is announced »https://t.co/VWBqNnthWb pic.twitter.com/Sjdp4AzXo5

Canelo responds to MMA Manager: “and this guy… who is he?”
Who is coming now? Rafael Fiziev and his wishes in the UFC
Frankie Edgar’s wife speaks out after UFC 268 loss
UFC/MMA 966